The Momentum Proteas have put the England defeat behind them and are focusing on the clash with Sri Lanka on Wednesday as they look to finish the ICC Women’s Cricket World Cup 2013 on a high.

West Indies beat the Proteas by two wickets in their opening Super Sixes match, dashing SA’s hopes of reaching the final, but Mignon du Preez and her charges are still eyeing a top four finish in the ICC Women’s World Cup 2013 in India.

The Momentum Proteas have been lauded after they thrashed Pakistan to advance to the Super Sixes of the ICC Women’s Cricket World Cup 2013 in India. Marizanne Kapp scored her maiden ODI century and bagged three wickets to walk away with the Player of the Match Award.

One Last Chance for Momentum Proteas

Despite a brave effort, the Momentum Proteas went down to Australia in Cuttack on Sunday to record their second loss at the ICC Women’s Cricket World Cup 2013. The Proteas need to beat Pakistan on Tuesday to advance to the Super Sixes.

While recognising the enormity of the task, the Momentum SA Protea cricket team are focussed on upsetting Australia on Sunday, in their second group-stage fixture of the ICC Women’s World Cup India, after losing to New Zealand by 150 runs on Friday.

New Zealand got the better of the Momentum Proteas in their opening Women’s World Cup match in Cuttack today. South Africa face Australia in their second group game on Sunday. 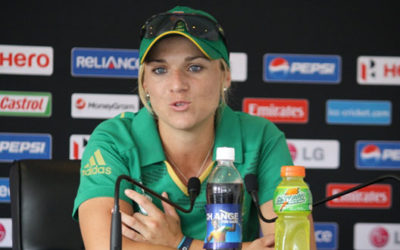 The Momentum Proteas begin their ICC Women’s World Cup campaign on Friday when they face New Zealand. Their final Group match against Pakistan on February 5 may prove decisive as both teams vie for the final Group B spot in the Super Sixes.

Bowlers paradise but Dané van Niekerk Momentum SA stands out with bat and ball as Proteas suffer 2-wicket loss to Sri Lanka, in their second and final warm-up ahead of the ICC Women’s World Cup 2013 in India