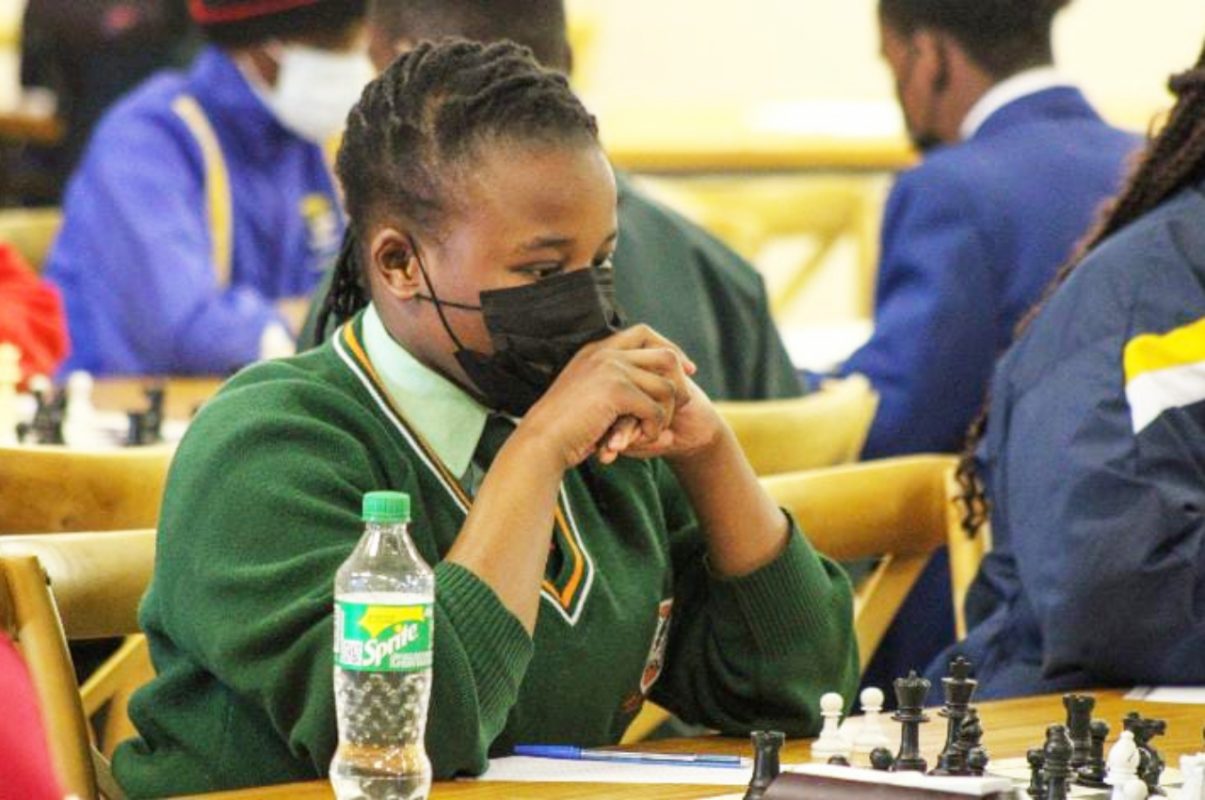 Hailing from Klerksdorp, Monchosi’s love for chess began in 2015 at the age of 7 when she was afforded the opportunity to participate and explore various sporting codes available at her previous primary school.

Monchosi opted to focus on chess which she says improves general cognitive ability and also helps academically, especially in Mathematics and Science.

Although the boardgame is a hobby, the now high school student says it has helped her to think ahead, not rush decisions and weigh the pluses and minuses of her choices.

Atlegang, thank you for chatting to us. Please tell us more about yourself?

My name is Atlegang Monchosi, 14 years of age. I was born and raised in North West in Klerksdorp. I am a young girl who strives to do her best in all she does.

I am a very shy, kind, friendly, helpful, bubbly and an energetic person. I am a chess player and currently in Grade 8 and raised by a single mother.

My love for sport began in 2015 when I was in grade 1 (7-years-old) at my previous primary school (Methodist Primary School). This was the first year that I was allowed to participate in sport, so I took the opportunity to participate and explore all the available sports that were at my previous school.

Why did you choose chess?

I chose chess because I love board games and it is a very interesting game. Chess is a challenging game and I love challenges. It improves general cognitive ability and also helps academically, especially in Mathematics and Science. It helps you to think ahead and not to rush your decisions and weigh the pluses and minuses of your choice.  So, it is a hobby that one can benefit from (killing two birds with one stone).

In February, you represented the province at the SA National Schools Sport Championships in Bloemfontein. Please tell us about it and how you performed.

The tournament was school leagues (Nationals level) where we played 6 games – I won all my six games. It was a beautiful journey full of joy and happiness. I won a gold medal for my individual performance in the U/13 girl’s section and secured a spot in the chess squad that will be representing South Africa overseas later this year. I received the title for South African Chess Champion for the U/13 Girls section.

Tennis legends Serena and Venus Williams. They are the World’s black Tennis Champions believing that the sky is the limit. Serena’s unshakeable self-belief is a big part of what makes her so inspiring. They are strong, hard workers and resilient.

They are the living example of the saying: “It is not about where you come from or how it started, it’s about how you handled the challenges to get where you are.”

Another reason I admire them is that despite all their busy schedules they still make time to help the world, they are helping to build schools in Jamaica. These two sisters are  Queens that will never be forgotten.

What do you want to study when you finish school?

I want to study Cardiology and become a Cardiac surgeon which is a heart specialist. A Cardiologist specializes in diagnosing and treating diseases of the cardiovascular system.

What has been your best moment of playing chess so far?

I would say that winning big chess tournaments were the best moments ever, especially being first position. The team moments when we celebrate each other’s success.

Another highlight is when I was playing U/8 and I was at this tournament, I entered the playing venue sat on my seat and my opponent who was a boy said to me: “I am going to beat you easily,” I kept quiet and we played. Guess who won the game? I did and I won in 4 moves.

My greatest ambition is to become a WGM (Woman Grandmaster) because that is the highest title in chess. I also have ambitions of studying at one of the best universities in the world and become a doctor to help save lives.

When you are not at school and playing chess, what do you do in your spare time?

I relax, watch television, read the Bible trying to follow God’s ways, spend time with my family and sometimes sleep to recover from all the hard work.

Most people don’t know my real personality. I am actually a very loud person, but always timid around other people.

Keep going, keep pushing, keep believing, keep practicing and keep being yourself. We all have a rocky and challenging start but it’s not about how it starts, it is about how you manage to pull through and be where you are.

Believe in yourself because if you don’t, nobody will. Never compare yourself to anyone because you are unique and special just the way you are, and you can’t be another person.

In every game you play, try to play the best you can, be the best version of yourself. Never underestimate a person and haveconfidence. As Serena Williams once said: “A champion is defined not by their wins but by how they can recover when they fall.” I believe we all have a purpose to fulfill on this Earth, so please use your talent while you still can.