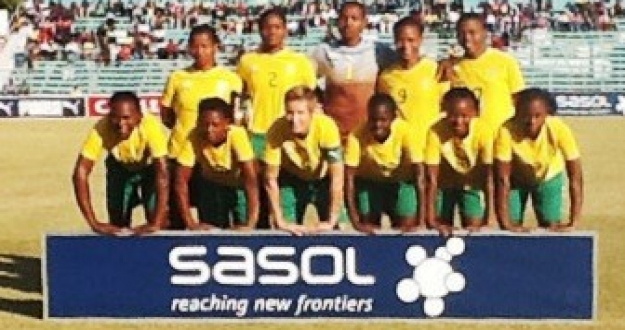 Banyana Skill to the Fore in Mozambique Win

Banyana Banyana turned on the magic to hammer Mozambique 5-0 in an international friendly played at Kanyamazane Stadium on Sunday.

The game got off to a slow start but the experience in the Banyana Banyana team began to show as the match progressed. The hosts then took firm control of the match as they gained momentum to rattle a shaky Mozambican defence.

Silindile Ngubane broke the deadlock with a 37th minute goal and from then it was one-way traffic as Joseph Mkhonza’s charges turned on the heat in emphatic fashion.

The Sasol-sponsored side was all over the visitors after the opener and it was a question of time before a glut of goals opened up. And the crowd seemed to enjoy the display of football and responded with some song and dance.

The hosts finished the half with an upper hand despite leading by a slender 1-0 lead.

The South African ladies picked up from where they left off in the first half, and just three minutes into the second half the visitors appear to crumble under pressure, with Celia Uate putting the ball in her own net for Banyana’s second goal.

Former captain Amanda Dlamini was unstoppable and a constant thorn in the Mozambican flesh as she controlled the game with great aplomb. It was Dlamini’s great run down the right flank that resulted in Ngubane slotting in the third goal of the match.

Dlamini was once again instrumental in the team’s fourth goal. This time Nocawe Sikiti latched on to a well-timed Dlamini pass to chip the ball into the net. Then Dlamini capped her inspiring performance with a goal of her own to seal a memorable victory for the hosts.

The former Banyana captain picked up the Diski Queen of the game for her instrumental role in the victory.

“I felt my performance on the field was fine but I could have done better as there is always room for improvement. The coaches have once again put their confidence in me, and it is very humbling that I got to play my own game,” said Dlamini.

Mkhonza and his team head back to Johannesburg to begin preparations for their game against Zimbabwe scheduled for Saturday, 15 June 2013. “I am very happy with the performance today,” said Mhonza after the win.

“The girls stuck to the game plan and even the new players were not overwhelmed by the international stage. There are however a few things that we will need to work on before the match against Zimbabwe.

“Overall I am happy with what I saw,” said Mkhonza.