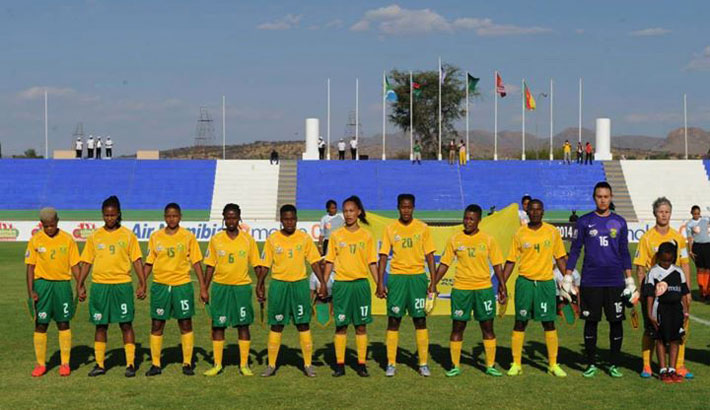 Banyana Banyana kept their hopes of qualifying for the 2015 Women’s World Cup in Canada alive when they beat Algeria 5-1 on Saturday, 18 October at the Independence Stadium in Namibia.

Banyana Banyana needed a convincing win to proceed to the semi-finals of the African Women’s Championships and they put up a brave fight as they rampaged Algeria.

A brace by Portia Modise and goals by Sanah Mollo, Mamello Makhabane and Amanda Dlamini sealed the much needed three points and goal difference for Banyana Banyana.

Banyana Banyana started off the strongest, dominating possession in the opening minutes of the game.

Mollo came close to opening the scoring in the 18th minute, but her on-target shot from outside the area deflected off an Algerian defender and went out for a corner.

Banyana Banyana were awarded a penalty after the Algerian defender handled the ball in the box.

Nompumelelo Nyandeni stepped forward to take the spot kick, but her kick was saved by Kahina Takenint.

Vera Pauw’s charges understood the importance of the match as they continued to pile pressure on Algeria.

Dlamini came close to opening the scoring, but her long range shot was spilled by the keeper, and there was no Banyana Banyana player close by to finish-off in the 34th minute.

Modise also came close immediately after with another long shot, which fell in the hands of the keeper.

Dlamini made up for her earlier miss when she put Banyana Banyana in the lead. She received a cross from Modise in the 37th minute, controlled in the box and easily tapped in passed the keeper.

Algeria did not pose much of a threat to the Sasol-sponsored women’s national team.

They only had about two goal scoring opportunities in the first stanza.

Banyana Banyana returned from the half-time break and continued from where they left-off, with Leandra Smeda forcing Takenint to parry her shot out for a corner in the 46th minute.

South Africa continued to control the pace of the match, having countless goal scoring opportunities before Sanah Mollo scored the third goal in the 70th minute.

Makhabane drifted a place kick into goal that confused the defenders and the keeper for the fourth goal for South Africa.

To put a final seal of approval on the match, Modise made history when she returned to score her 100th goal with just minutes remaining, becoming the first African player ever to reach that mark.

Photo 3 caption: An elated Portia Modise sets off in a blur of happiness after scoring her 100th international goal in Banyana Banyana strip, the first player in Africa to record this momentous achievement. Photo: Screengrab of the Supersport Match Broadcast