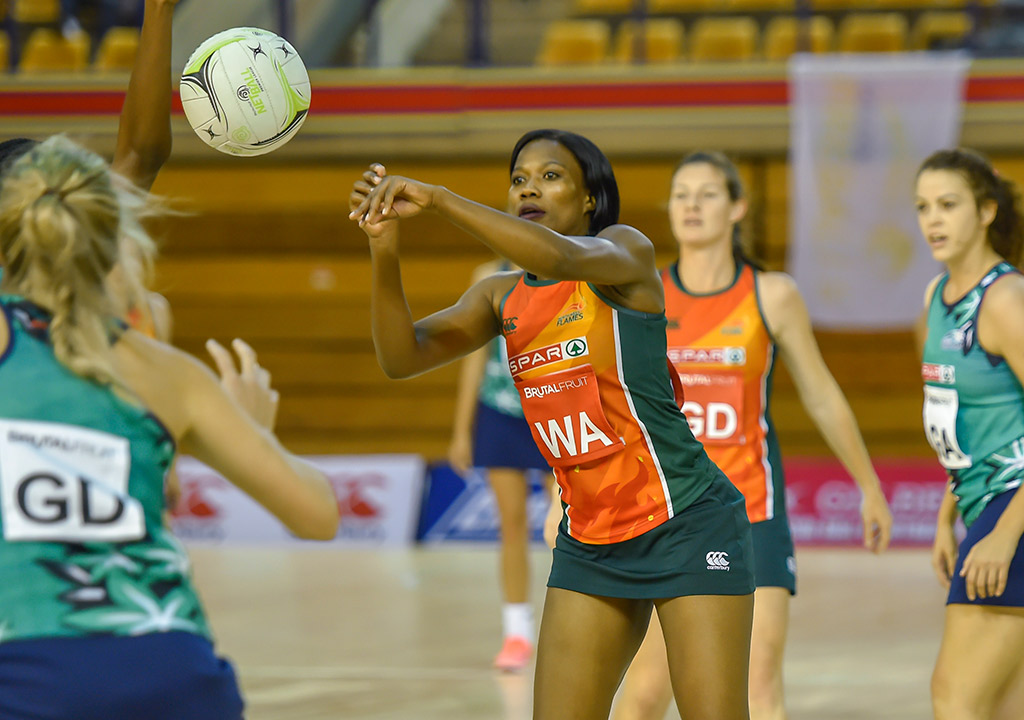 Fireballs Lose to Stings, Crinums and Flames Draw in BFNPL

The Free State Crinums came from behind to draw their Brutal Fruit Netball Premier League match against the North West Flames at the Pretoria University Sports Centre on Saturday night.

The Crinums got off to a good start and appeared to be in control for the first five minutes, but the Flames found their rhythm and were 15-14 ahead at the first break. They extended their lead to 29-25 at halftime and maintained their lead until the final minutes of the match.

The Crinums started their comeback in the third quarter, when they outscored the Flames by 13 goals to 12.

The Flames drew ahead again and were soon six goals ahead, but when their goalshooter Vanes-Mari Proudfoot had to leave the court with an ankle injury, the Flames’ momentum was broken and the Crinums started to reel them in.

The crowd cheered every goal scored by either side and tension rose on court.   With a minute to go, the Flames were just one goal behind and they equalised on 50-all just seconds before the final whistle.

“I am very disappointed. I thought we had control of the match,” said Flames coach Elsje Jordaan. “Our defence was too loose at certain stages but I think we were better than we were last week. The Crinums didn’t give us time to get into position and congratulations to them on that.”

“I think it was a very good match and I am happy with the draw,” said Crinums coach Burta de Kock.

“I made quite a few changes during the game – for instance, I brought Alicia Puren on as goalshooter instead of goalkeeper in the third quarter because she is very tall, and has attitude and that worked well.

“We definitely played better than last weekend. Now we have to go out against the Stings tomorrow and maintain our consistency.”

Western Cape Stings beat the Gauteng Fireballs 58-30 in a match that was more competitive than the score line suggests.

The Stings, who have lost just one match so far, were 19-8 ahead at the first break and had a 34-20 lead at halftime. They were in control throughout the match but the Fireballs fought like tigers, with their defenders making life difficult for the Stings shooters.

The Stings defenders were also outstanding, winning rebounds and turning the ball in the circle. Their shooters had better goal averages and that made the difference.

“I didn’t expect to win by such a big margin,” said Stings coach Annelie Lucas. “We thought it would go down to the final whistle. I think our strength was fitness and self-confidence.”

Fireballs coach Dorette Badenhorst said the Fireballs were slow to start and the match could be lost in the first five minutes.

“I think I have to rethink our warm-up so they are firing on all cylinders from the start,” she said. “But I don’t think the score reflects how well they played. I am still confident we can finish in the top four.”

The Gauteng Jaguars coasted to a 66-28 victory over the Eastern Cape Aloes.

The coastal team started off well and were just one goal behind at the first interval, (11-10) but the defending champions were having none of that and imposed their authority from the second quarter on. By halftime, they were 33-16 ahead, and they stretched their lead with every successive quarter.

Both coaches made numerous changes during the match – Jaguars coach Jenny van Dyk giving all her players some game time, and Aloes coach Des Neville seeking a better combination.

“I started with five bench players,” said Van Dyk. “I wanted to see how they would play under pressure…”

“We are still pushing for excellence and we know we can’t afford to be complacent, even though we have won all our matches so far,” said the Jaguars coach. “A concern I have is that the goal averages do not reflect the hours of practice the players put in every week. We will have to work on that,” she said.

“We had a great start but not such a great ending,” said Neville. “We knew we would struggle against the Jaguars, but I was pleased that we met the smaller targets that we set for ourselves.”

Earlier, the Mpumalanga Sunbirds beat the Northern Cape Diamonds 43-34, and the Kingdom Stars came back from trailing 26-23 at halftime to beat the Limpopo Baobabs 50-46.

Photo 1 caption: The day’s final match between Kgomotso Itlhabanyeng WA of the Flames during the 2018 Brutal Fruit Netball Premier League game between the Flames and the Crinums at Rembrandt Hall in Pretoria on 2 June 2018. Photo: Christiaan Kotze/BackpagePix

Photo 2 caption: Fireballs Captain and WD Zanne-Marie Pienaar (left) and Stings GA Helene Steyn are caught together in a tense tussle between the two sides,  during the 2018 Brutal Fruit Netball Premier League at Rembrandt Hall in Pretoria, on 2 June 2018. Photo: Christiaan Kotze/BackpagePix

After nearly a year of forced inactivity, the SPAR Proteas swing into action on Thursday, 26 November 2020, in the first of three Test matches against long-time African rivals, the Malawi...