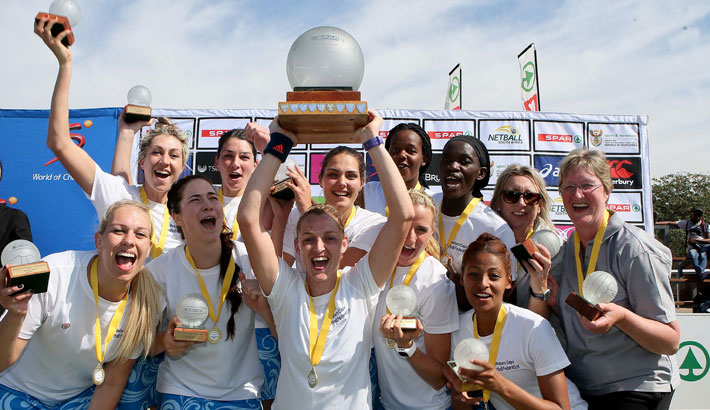 Western Cape, who had been the best team throughout the tournament, finished off a golden week on Saturday to win the SPAR national netball championships at the Hoy Park Centre in Durban.

They beat Free State by 50 goals to 35 in the final. Western Cape dominated the game from the start, and Free State never looked like coming back from behind. They were just three goals ahead at halftime, but then they turned up the heat and extended their lead in the next two quarters.

The Free State defenders, Tanya and Karla Mostert, were unable to restrain the Western Cape attack, led by the very tall goalshooter of the tournament, Jaumbuaije ‘Bytjie’ Zauana, assisted by Vanes-Mari du Toit and Mari-Lena Joubert. Du Toit moved to goalkeeper in the second half, and made life difficult for the Free State attack.

Captain Erin Burger had another outstanding game, leading her team with some inspirational moves. “It was teamwork, solid defence and a good attack that helped us to win all our matches this week,” said coach Annelie Lucas.

“I started with the same combination in every game, and then brought on other players to rest some legs after halftime. I brought the bench players on with five minutes to go because they had helped us to win the game, and they deserved to play in the final,” said Lucas.

“We have a very good club structure in the Western Cape, and we have a lot of very experienced players,” she said.

Free State coach Burta de Kock said the outcome was disappointing, but she said it was always going to be difficult against an experienced team like Western Cape.

“But I am proud of the players, and they will benefit from the experience of playing in a final. Most of my team will be playing in the Varsity Cup and we will put into practice what we learned at this tournament.

Gauteng A1 finished in third position, with North West in fourth.

Earlier, North West narrowly beat Gauteng 52-50 to take the Under 21 title, in a thrilling match that went into extra time.

Photo 2 caption: Karla Mostert (left), goal defender of the Free State, and Jaumbuzile Zauana, goal shooter of the Western Cape, in a contest for position in the final of the SPAR national netball championships at the Hoy Park Centre in Durban. Mostert was named player of the tournament and Zauana as best shooter. Photo: Reg Caldecott

Photo 3 caption: Vanes-Mari du Toit (left) and captain Erin Burger celebrate after defeating the Free State in the final of the SPAR national netball championships by 50-35. Both players also lifted the trophy two years ago with Gauteng North before moving to the Cape. Burger was named best centre court player. Photo: Reg Caldecott

Photo 4 caption: Erin Burger, captain of the Western Cape, won yet another netball trophy, this team with the Western Cape. She previously won a number of SPAR national netball championships with Northern Gauteng. Photo: Reg Caldecott