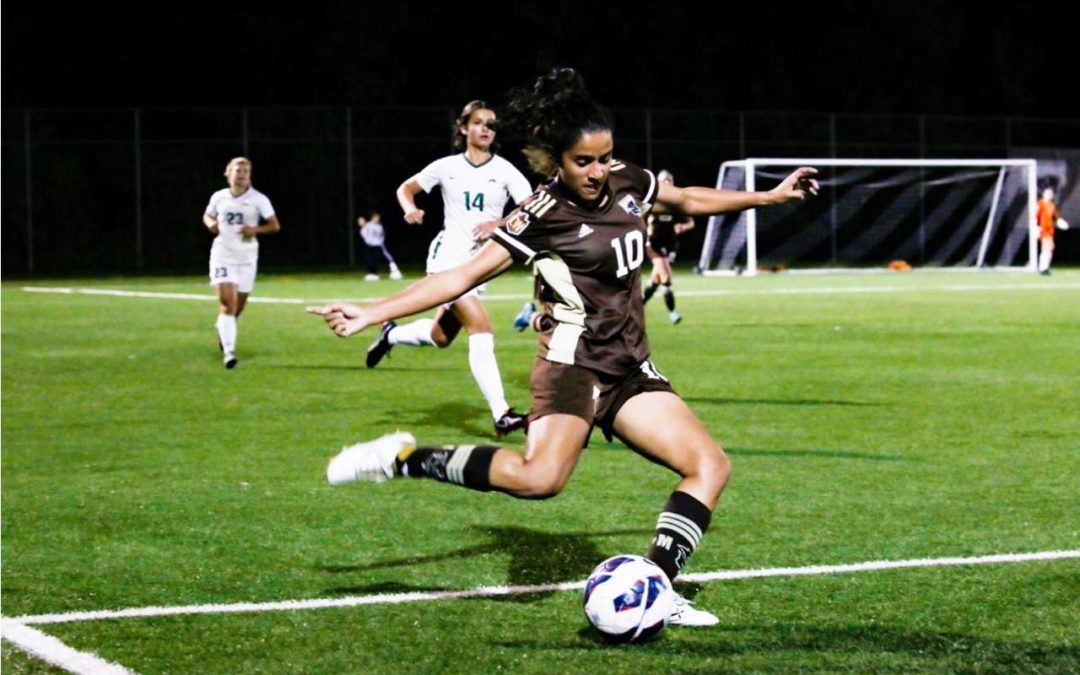 Promising Indian footballer, Dalima Chhibber, became an Internet sensation last March when her right-footed free kick from 40 yards out thundered into the back of the net to give India the lead in the South Asian Football Federation (SAFF) Final against Nepal.

Her bend it like Beckham-style goal laid the platform for India’s gold medal effort, and their fifth straight SAFF title. Headlines screamed “Bend It Like Dalima” and “Curl It Like Chhibber” as Internet users lauded the 22-year old’s striking prowess.

Chhibber, who made her national debut in 2016, counts that much talked-about goal as one of her career highlights, along with the Most Valuable Player of the Tournament award she picked up.

A few months later, the talented former track and field athlete made a surprise move, when she packed her bags and headed for Canada, to play professional football and study towards her Master’s in Psychology.

Chhibber comes from a passionate sports family, with everyone involved in sport in some way. Both her parents are former athletes, and her sporting follows a rich legacy, which includes her father having started the Delhi University women’s football team, and her mom having scored the university team’s first-ever goal.

Women’s football is still developing in India but Chhibber is optimistic about the sporting code’s prospects, and is keen to play a leading role in helping India qualify for the FIFA Women’s World Cup in the future.

For now, her focus is on being a success in Canada, where she plays for the University of Manitoba Bisons, and using her experience there to power Indian women’s football forward.

She spoke to Kass Naidoo about the role her parents played in shaping her love for sport, her passion for football and her dream to play a leading role in Indian women’s football.

Dalima, it’s great to talk to you, thank you for making time for gsport. Where does your passion for sport come from?

I guess the love and the passion for sports runs in my family and that is where I got it from. My parents were sportspersons too and it was passed onto me from them. My family is like a sports family, and we cherish the times and all our different experiences as a sports person in the family.

Looking and hearing about experiences from each other, helps us grow as individuals and as sports players and the passion for the game grows even more.

How has COVID-19 and the almost global lockdown impacted you?

I believe the biggest impact has been not being able to go out and play football anymore. It is a sport you need a team to play with but with the situations, we do not know when it will resume and that is the tough part.

How are you keeping fit during this time?

During this time, I am trying to workout at home. I have schedules and workouts planned. As a team, we receive our workouts from the coaches and we follow them at home and focus on all the aspects of our trainings as much as we can.

It is a nice opportunity to work on the weaknesses as a player and become better, and with that thinking, everyday, I focus and try to improve and make myself a better player.

Was football always first choice, considering how popular cricket is in India.

“I would participate in both the competitions, but I always chose football matches and trips over track and field.” Indian football star, Dalima Chhibber

Football is still a growing field in India, and it was tough choice to take it professionally, but it was the only decision I wanted to take because I love the game so much.

Yes, cricket is really popular and the preferred sport and it was even when I was growing up, but I was ready to take the risk in a sport like football which was not known back then, because it requires someone to start for others to follow. The sport (football) now is taking up pace and is growing at a rapid pace in India.

There is a great story about your dad starting a women’s football team while he was at University. Tell us more about it.

The college my dad and my mom were a part of had a track and field team. The Delhi university later decided to have a football team for the first time. So when my dad got to know about that, he realized that they had around 8-10 girls from track and field, and then after that he decided to make a team out of those track and field players, given they were fast and quick and how that would help in football as well.

“They participated in the inter-college tournament for the university. They were ranked third.” – Dalima Chhibber on her parents’ rich footballing legacy

Your mom played in that team that your dad started?

How do they feel about your passion for football and the route you have taken?

My parents are proud and they have always been very supportive of the path I took and playing football. Although, initially since football was not so known or flourished, my parents, especially my dad wanted me to do track and field as him and my mother were both track and field athletes and it is an individual sport as well. But they were always supportive of whatever I wanted to do and whatever path I wanted to take.

You made a decision to go to Canada to play football. How is it going and what are you gaining out of the experience?

It has been great in Canada; I am full time involved with the Manitoba Bisons and it has been going really well. I am pursuing my masters in sports psychology as well along with playing professional. Overall, it has been a great one year.

What are your ambitions when it comes to your future with the Indian national team?

My ambition with the national team has always been of being better as a team and making India a major footballing country. The target in the near future is to be one of the best in Asia and eventually progress to the FIFA World Cup.

The major female sporting heroes I have followed are firstly, Carli Lloyd from football. The hard work and the dedication she brings to the game is so inspiring and it makes you want to work hard every day.

“The female athlete who I have been really inspired by is the world champion boxer from India, Mary Kom.”- Dalima Chhibber on her women athlete icons

Lastly, one athlete I really started following recently is Meghan Rapinoe. I have great respect for her as a player and the things she stands and fights for outside the field as well.

What inspires you and how do you lift yourself when you are down?

While training or otherwise, my biggest inspiration is my parents and my sister and my brother. I guess, sitting and talking to them or just being around them is a major boost for me, to be a better player and moreover a better person.

Also, I love reading. Reading is very inspiring and it helps me maintain a positive outlook in tough circumstances.

What is the greatest highlight you have achieved?

It would be tough to choose one. But if I have to choose one of the most memorable moments of career, it would be when I received the Most Valuable Player Award in The South Asian Football Championship along with helping the team with a goal in the final match to win the gold medal for the country.

There have been a lot of highlights with the national team and even as an individual player (for example, moving to Canada to pursue professional football along with completing masters for which I received full scholarship).

What can the world learn from India and Canada about the promotion of women’s sport in these countries?

I guess the biggest learning from the two countries would be the importance of having a basic infrastructure for women in football. This is of importance to promote women’s football in a way to give players the opportunity to play and learn and grow with the playing experience.

Canada being one of the best in women football has proved that along with a few more countries.

India, now has a well-defined professional league (Indian Women’s League) which has helped the National team perform better and better over the past few months and years. This in itself is an example to have a basic defined infrastructure to promote the women in football.

What is your advice to aspiring sportswomen who may be facing challenges as they chase their dreams?

From my own experience, I would just like to advise those sportswomen to believe in themselves and keep striving for what they believe they are capable of achieving.

“If you would believe in yourself, the people around you will too.” – Dalima Chhibber shares advice to aspirant athletes

It takes faith in oneself to be able to achieve their dreams, because till the time you will not believe in yourself, it would always look like a far-fetched dream. But with the desire, determination to work hard can change everything.

What is your greatest sport ambition?

As I said before, my greatest sporting ambition is to help take my national team to the FIFA world cup someday. Also, I would like to play as much and for as long as I can in professional leagues and teams outside my country as well to gain the experience and help the national team grow as well.

Photo 1 Caption: Promising Indian footballer, Dalima Chhibber, became an Internet sensation last March when her right-footed free kick from 40 yards out thundered into the back of the net to give India the lead in the South Asian Football Federation (SAFF) Final against Nepal. Photo: Supplied
Photo 2 Caption: Her bend it like Beckham-style goal laid the platform for India’s gold medal effort, and their fifth straight SAFF title. Headlines screamed “Bend It Like Dalima” and “Curl It Like Chhibber” as Internet users lauded the 22-year old’s striking prowess. Photo: Supplied
Photo 3 Caption: Chhibber, who made her national debut in 2016, counts that much talked-about goal as one of her career highlights, along with the Most Valuable Player of the Tournament award she picked up. Photo: Supplied
Photo 4 Caption: A few months later, the talented former track and field athlete made a surprise move, when she packed her bags and headed for Canada, to play professional football and study towards her Master’s in Psychology. Photo: Supplied
Photo 5 Caption: Chhibber comes from a passionate sports family, with everyone involved in sport in some way. Both her parents are former athletes, and her sporting follows a rich legacy, which includes her father having started the Delhi University women’s football team, and her mom having scored the university team’s first-ever goal. Photo: Supplied