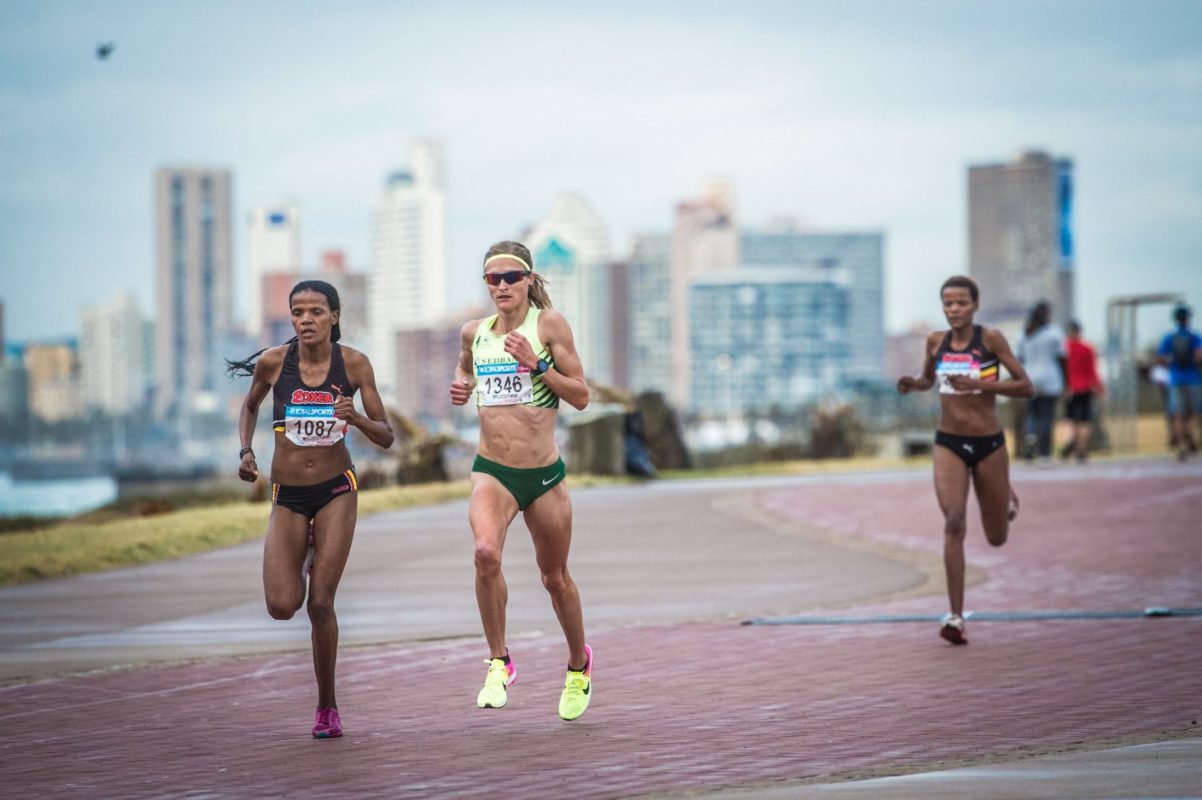 Seen here (from left to right):  Lebo Phalula, Irvette Van Zyl and Lebogang Phalula battle it out on route at the 2016 Totalsports Women’s Race in Durban.
Photo Credit:  Tobias Ginsberg
The Totalsports Women’s Race Durban has attracted the attention of a number of Elite Female runners including Lebogang Phalula, Rutendo Nyahora and Mapaseka Makhanya.

Taking place at Kings Park Athletics Track this coming Sunday (16 July 2017), the Totalsports Women’s Race’s fast, flat route will not only pit runners against each other but also against the clock as they’ll be running to better their personal best (PB) finishing times over a 10km distance.

According to Phalula, she loves running in Durban because of the flat routes.  “I will definitely be going for a PB,” says Phalula.  “I love the Totalsports Women’s Race because it’s only for the ladies.  We only have to compete against each other on the day.  Competition is, however, getting tougher with a lot of new faces on the start line lately.  My goal is to focus on my race.  It’ll be a big achievement for me should I win this year.”

For Nyahora it’s the distance and the competition that attracts her to the Totalsports Women’s Race.  “It’s nice not having to compete with male runners on the day,” says Nyahora.  “A lot of top female athletes take part in this race.  Competition on the day will be strong.  I am hoping for a top three position.”

Makhanya will make her Totalsports Women’s Race Durban debut on the day.  “I enjoy participating in sporting events that support and uplift women,” says Makhanya.  “I am really looking forward to the race.  The competition will be tough, but healthy.  A win won’t come easily.  My goal is to go out and do my best, but most of all enjoy the race.  I’m looking forward to a great run and meeting and encouraging other women.”

With two fun events to choose from, a 5km run/fun walk and a 10km run/fun walk, the Totalsports Women’s Race is ideal for family and friends.

Each entrant will receive a magnificent fitted Nike t-shirt, an exclusive finisher’s bracelet, on-route entertainment and an exhilarating live performance by a well-known South African artist.

Charity Support:  The Totalsports Women’s Race support PinkDrive, a Non-Profit Company (NPC) that is committed to improving breast cancer awareness, education, and providing and offering free services to the medically uninsured across South Africa.  Entrants are invited to “Run For Life” at this year’s event.

PinkDrive will be present at the Totalsports Women’s Race in Durban offering FREE clinical breast examinations and educating on the importance of self- breast examinations.   Visit PinkDrive’s “Shop4Cancer”, show support and “Run For Life”.

Next Up:  After Durban, the Totalsports Women’s Race will head to Johannesburg and Cape Town.