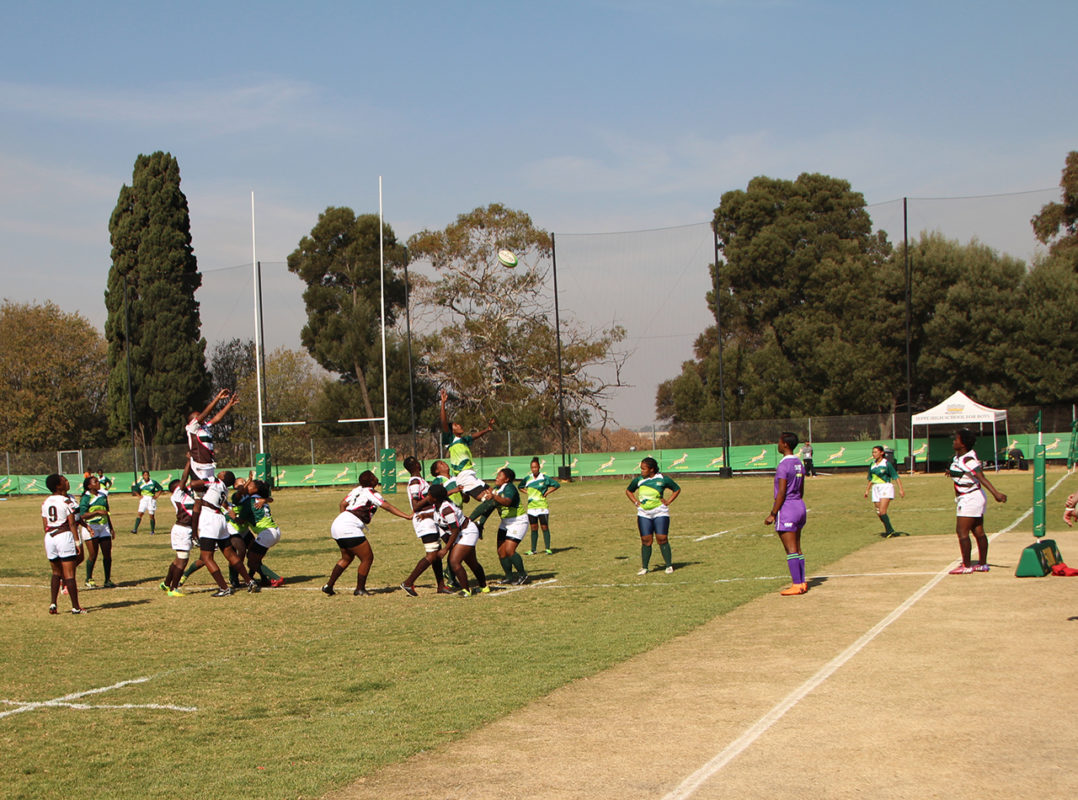 The SA Rugby Youth Weeks kicked off in spectacular fashion on Monday with a barrage of tries in Johannesburg where the Under-16 SA Rugby Girls Week started at Jeppe Boys High in Johannesburg.

The action resumes on Tuesday when the Under-18 SA Rugby Girls week play their first fixtures (see below for times).

The Pumas started their campaign with a strong 39-10 win over Leopards. They held a 29-5 lead at the break, and although the Leopards’ defence firmed up in the second half, the Pumas side could muster two more scores for a solid win. Snethemba Mkhoza (lock) and Nonhlanhla Ngwenya (fullback) scored a brace each.

The Limpopo Blue Bulls had the better of their counterparts from Griquas, beating them 36-12.

The northern side scored six tries to two and dominated the match from early on, holding a 24-5 lead at the break. Industrious lock, Vaina Ubisi, was rewarded with two tries.

The early morning action was set alight with the hosts’ performance, as the Bidvest Waltons Golden Lions had way too much firepower for the Griffons and scored nine tries in their 53-0 win. The Griffons, however, deserve credit for overcoming their first-half jitters, which saw them concede 39 points, with the side delivering a better performance in the second.

A hat-trick by flanker, Kathlego Legodi, and a brace by flank partner, Tanya Shava, indicated the impact they had in the match.

There was another hat-trick on offer when the Free State Cheetahs outplayed the Valke 29-10. The Free State No 8, Rachel Kock, dotted down three times against her Gauteng opponents, with winger Kgomotso Maisela also getting a brace in the five try romp.

The Free Staters held a 17-0 lead at the break, but the second half was more even, with both teams getting two tries a piece.

DHL Western Province delivered a strong second half performance against Border Country Districts to show their intent at the tournament, winning 40-0.

The Cape side scored two tries in the first half for a 12-0 lead, but then pulled away in the second, as they found their rhythm and their combinations started to click.

Border was impressive in their 41-22 win over SWD Eagles. It was a tight match throughout, but the stronger start by Border helped them winning the match. They held a 29-12 lead at the break and in the end outscored their opponents six tries to four. Four of those were converted by Sne Maliwa, while SWD could only convert one of theirs.

The Blue Bulls had too much in the tank for Boland, winning 41-7. They held a 24-0 lead in the first half and built on that for a convincing win.

The Blue Bulls have a solid all-round game and will be hard to stop if they continue with this style of play. They had six different try-scorers, showing the threat they pose.

Eastern Province Edge KZN in Match of the Day

The final match of the day proved to be the most competitive, with Eastern Province getting the better of KwaZulu-Natal for a 22-14 win.

It was a tight affair in the first half, with both teams scoring twice with KZN benefitting from a penalty try, but EP held onto a 17-14 lead going into the break.

The second half delivered few scoring chances, but when fullback Johnerecia Booysen was offered one, she scored the try that eased her team to victory.

Caption 1 option: The SA Rugby U16 Girls Week kicked off with on Monday, and they will have the stands to support the U18’s who play their first fixtures on Tuesday, at Jeppe High School for Boys in Kensington, Johannesburg. Photo: gsport