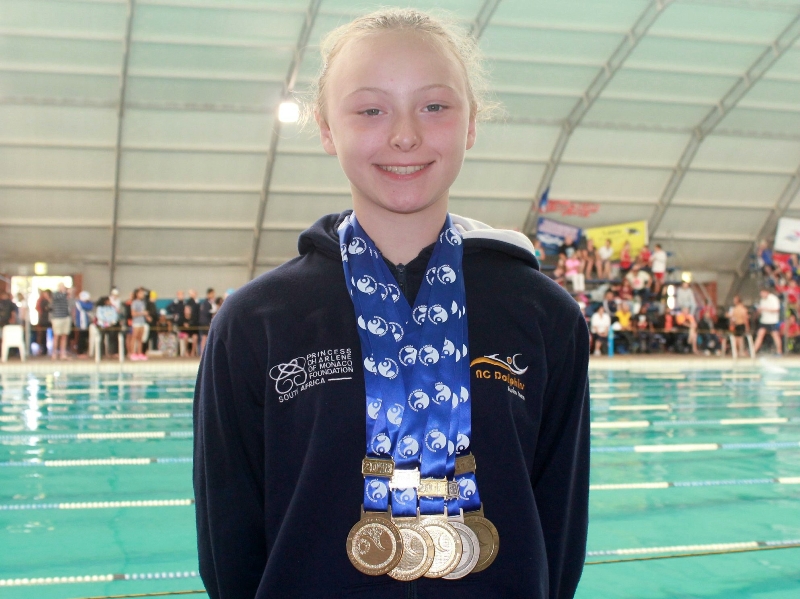 A mere three weeks after her eleventh birthday, Monica Botha from North Coast Dolphins Swim Team (NCDST) entertained the Western Cape swimming fraternity to not just one, but three wins in the 400m, 200m, and 100m freestyle at the SSA Level 3 Regional Championships, from 3-6 April 2018, at the UWC swimming pool in Cape Town.

These events took place on the first, second and third days of the Swimming South Africa level 3 Championships.  Pulling off this hat-trick was not an easy feat, as Monica faced strong competition from local Western Cape and visiting Namibian swimmers.

Highly motivated and fired-up 11-year old girls lined up for the 400-meter freestyle late afternoon, 3 April 2018.  The 400-meter is a timed final.  Monica, seeded in lane 4 with a time of 5:25:51 took an early lead.  Several swimmers challenged her throughout the race but she touched first in a personal best time of 5:20:37.

With two events under the belt, the daunting 100-meter freestyle remained on day 3.  This is always a fast race.  Monica secured lane 4 during the heats in a time of 1:09.86. Botha managed to conclude her hat-trick with a third win in a personal best time of 1:08:97.

The 50m freestyle was a close second place with 5/100th of a second difference between Gold and silver.  Monica touched second in 31:21 with a Namibian swimmer touching for the gold in a time of 31:16.

Other events and results:

She qualified for several finals and placed as follow:

21 events (heats and finals) over three days, 3 gold, 1 silver and 1 bronze and Girls 11 & Under top point scorer with a total of 81 points was an amazing result for this first-time SSA Level 3 swimmer.

About NCDST and Monica Botha:

Monica is a grade 6 homeschooled learner from Amanzimtoti KwaZulu Natal.  She is coached by her father, Jan Botha ASCA L3 qualified swimming coach.  Botha trains 5 days a week on her own at a local gym with a heated pool.

North Coast Dolphins Swim Team is headed up by Dominique Donner (PCMF project manager and head coach) and runs under the auspices of Princess Charlene of Monaco Foundation.  The swim club is responsible for water safety education and learn-to-swim in KwaZulu Natal.