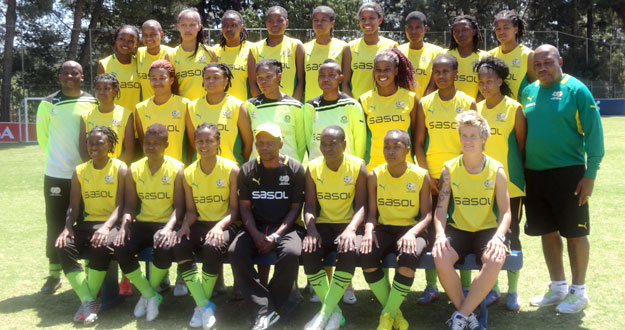 Banyana Banyana will be out to record their first ever win over Nigeria when the two African women’s football powers meet in the semi-final of the CAF African Women Championship 2012.

The clash takes place on Wednesday, 7 November in Bata, Equatorial Guinea. Kickoff is at 18h30 South African time, with 30 minutes extra time to follow if the score is deadlocked after 90 minutes of play. If there is still no winner after extra time, the match will be decided via a penalty shoot out.

The Sasol-sponsored South African Women’s Senior National Team go into the match ranked No 4 in Africa, compared to the No1 ranked Nigerians – and captain Amanda Dlamini’s team will be looking to break the mental block and record their first win over the Super Falcons since Banyana Banyana was formed in 1993.

“We came to the tournament with the aim of improving on our world ranking of 56th and African ranking of 4th, and with the top four African nations (Nigeria, Equatorial Guinea, Cameroon and South Africa) all having made the semi-finals, we now need to deliver to meet our objective,” said Banyana Banyana head coach Joseph Mkhonza.

Hosts Equatorial Guinea face All-Africa Games champions Cameroon in the first semi-final, to be played in Malabo earlier in the day (15h30 kick-off).

“We played to a 1-all draw with Nigeria in an international friendly played in Phokeng near Rustenburg, North West Province earlier this year (3 June), and shared a goal-less draw with them in Lagos two weeks later, so we know we are competitive enough to match Africa’s No 1 side,” added Mkhonza.

“The Banyana Banyana players are keen to do better than their bronze medal finish at the CAF African Women Championship 2010 held in Ekurhuleni near Johannesburg, and will be looking to use the experience gained at the London Olympics held in July, to good advantage.”

Mkhonza has an injury-free squad of 20 players to choose from and has the option of fielding his attack-minded 3-5-2 formation which brought success (a 1-0 win over Senegal and a 4-1 triumph over the Democratic Republic of Congo) in the group stages, or revert to the conventional 4-4-2 format.

Mamelodi Sundowns Ladies (Sasol League Gauteng) striker Andiswe Mgcoyi will arrive at the semi-final as the joint leading goal-scorer in the tournament on four goals, having scored the only goal of the match against Senegal and a hat trick against the Congolese.