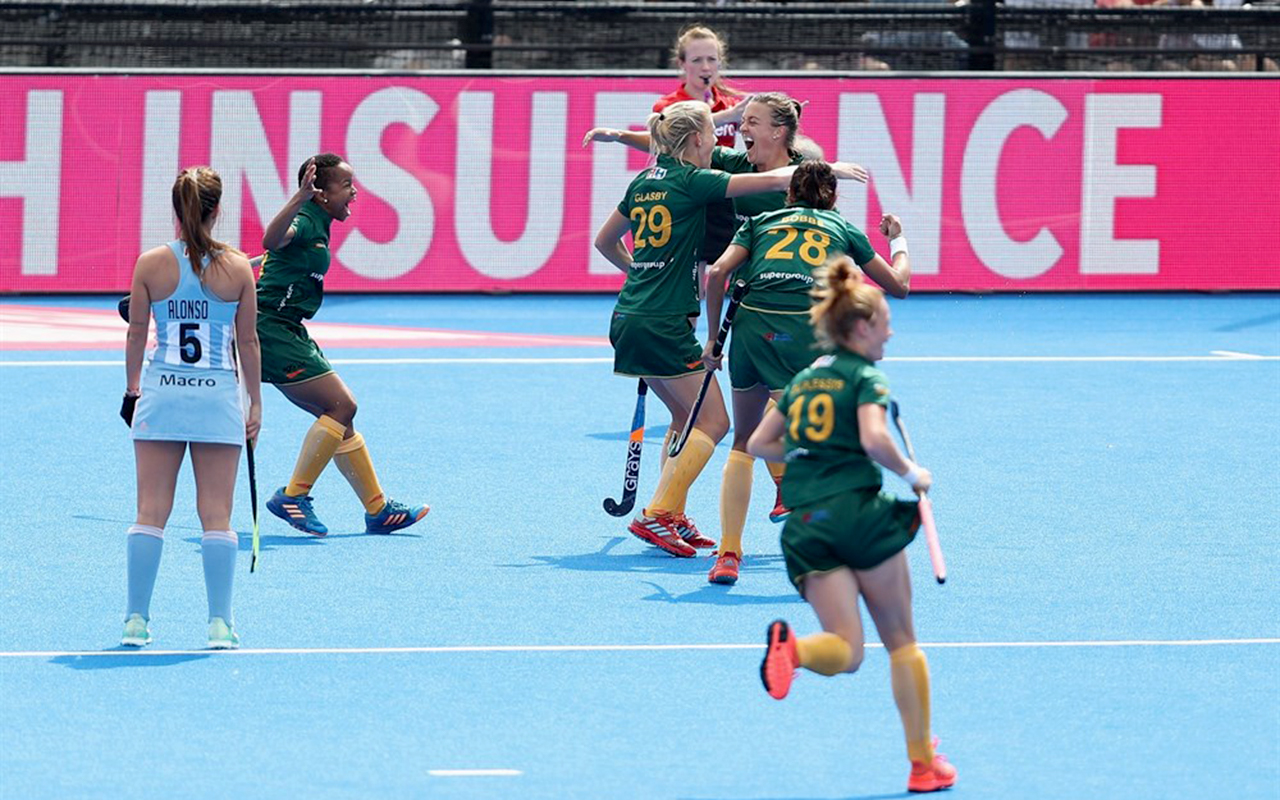 There was realistically more hope than expectation as Supergroup South Africa took on World number 3 Argentina in their final game of the FIH Vitality Hockey Women’s World Cup. The African champions had experienced a harrowing tournament so far, falling short against Spain and Germany, to all but dispel pre-tournament optimism.

The match marked the 250th match for South Africa for stalwart Lisa-Marie Deetlefs. If for nothing else the team would have been committed to making this a memorable match for the defensive star. And it appeared to be exactly the case as the Supergroup South African side put out a defensive masterclass in holding off an Argentina side that looked short of the regular magic.

Phumelela Mbande will take most of the plaudits, rightfully so, as the Player of the Match was also undoubtedly South Africa’s most outstanding player of the World Cup.

There may be questions about why she was subbed against Spain, but Mbande does her talking on the pitch and was on sensational form in not conceding from 13 penalty corners and at least ten further field goals.

The biggest question going forward is how will aspiring chartered accountant Mbande will manage her budding professional career and her sporting destiny, because she has become that important to the national team.

South Africa’s strikers had failed to get on the scoresheet throughout the tournament so far, but Jade Mayne had made a menace in the previous games through outstanding movement and positioning.

That it was her that got the goal through an opportunistic move and finish was almost a sense of inevitability as South Africa took a surprising 1-0 lead into the Half-time break.

Simone Gouws, who made her debut only in the matches against Canada during the pre-World Cup camp, and who showed remarkable maturity alongside the likes of Kara-Lee Botes, Erin Hunter and Deetlefs, will continue to develop remarkably.

Her performance during the World Cup left a feeling of optimism for the future of SA Women’s Hockey.

For all the defensive superlatives that were hurled South Africa’s way, the weight of pressure eventually did tell, and Argentina pulled level through Maria Granatto, they were not able to breach the defence again, in a display almost as effective as the mythological Trojans in defending their city.

So, the South African World Cup dream is over for another four years, the team will have a lot of questions to answer and plans to make, but the performance and result against Argentina could be the catalyst of belief that drives us to another level.

Photo 1 caption: The national women’s hockey team returned to SA humbled by two defeats and a draw in Pool C of the 2018 FIH Hockey World Cup in London, but their final performance was one for the memory banks, where a talented world no.3 Argentina were startled by an excellent Jade Mayne field goal, and faced a brave and tenacious South Africa for 1-all shared spoils to end the tournament for the Africans. Photo: FIH

Photo 2 caption: Kara-Lee Botes’ penalty corner in the 35th minute pulled the SA women hockey team back to a 1-2 deficit in their second encounter against Spain, but went on to concede their worst defeat of the tournament, ending 7-1 down to world no. 11 Europeans. Photo: FIH

Photo 3 caption: Shelly Jones seen in characteristically explosive action, in South Africa’s opening encounter against Germany, when the Africans learned a hard lesson in a tough 3-1 opening World Cup defeat, a match in which another of SA’s longtime stars, Lisa-Marie Deetlefs, scored for South Africa, a small victory the SA hockey women made sure to repeat in each of their three tough encounters. Photo: FIH

Photo 4 caption: Aspirant Chartered Accountant and goalkeeping phenomenon Phumelela Mbande was awarded Player of the Match in South Africa’s final World Cup outing, when she with her defenders saw off wave after wave of light blue attack, including 14 penalty corners without breach, for SA’s hard-earned honours in London. Photo: Hockey SA

← Monday Motivation: The Benefits of being a Student Athlete Happy 12th Birthday, gsport! →