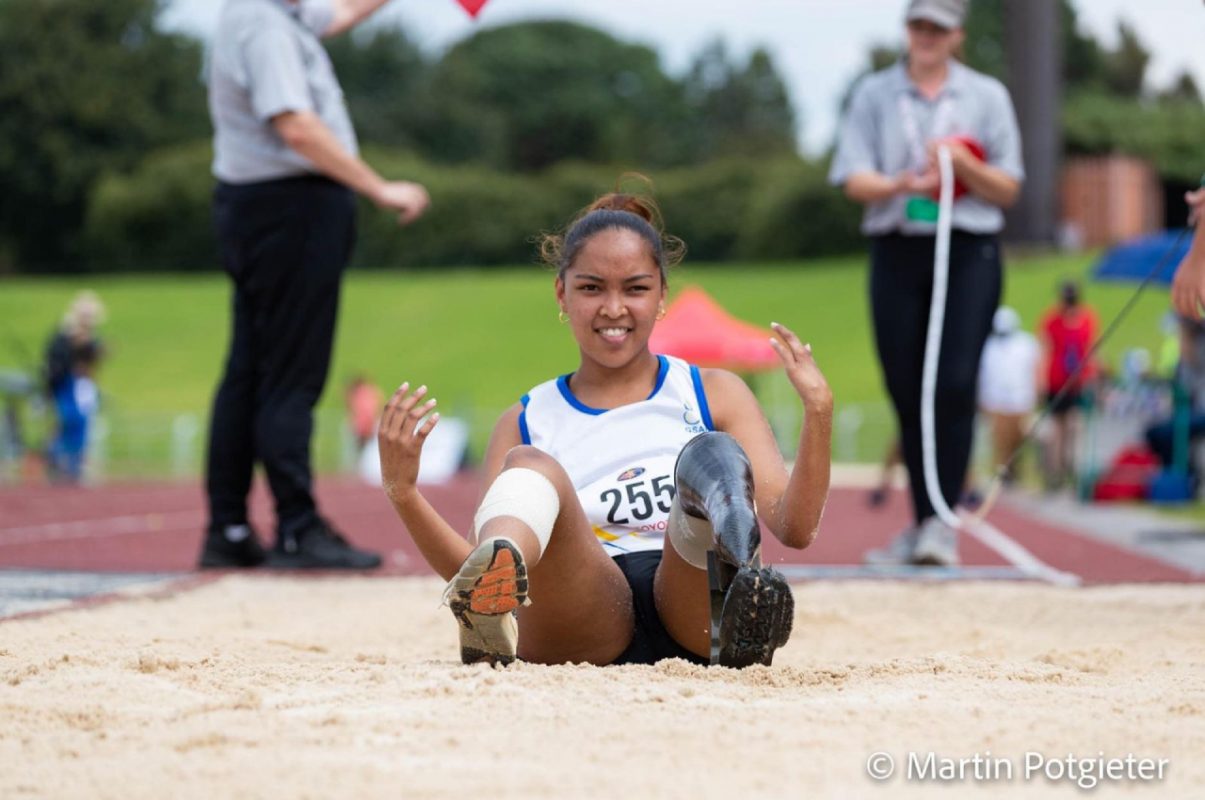 Student-athlete Kim MacDonald aspires to represent South Africa at the Paralympic Games and wants to become the world’s greatest para-sprinter under T64.

The 24-year-old set a new South African record for T64 Women’s Long Jump with 2,86m in the final at the 2022 Toyota SASAPD National Championships that took place in Germiston, South Africa.

Hailing from Ennerdale, MacDonald believes there is a rise of women para-athletes in the country and says there is a need for media coverage to close the visibility gap in disability sport.

MacDonald highlights wheelchair basketballer Michelle Moganedi and 100m and Long-Jump star Charné Felix as the women to watch in para-sport.

Speaking with Tlamelo Kganakga, MacDonald reveals her career highlights and balancing her academics and sporting career.

Kim, thank you for chatting to us. Please tell us about yourself.

I am Kim MacDonald, para-athlete competing in 100m, 200m and Long-Jump. I am 20 years old, a student-athlete in my 2nd year at University of Johannesburg.

I am originally from Ennerdale.

When did your career in sport begin?

I started doing sport in 2013, while I was at Hope School. I did not know it was possible for people with disability to participate and compete in sports. And so, I tried every sport code but eventually fell in love with athletics, specifically Long-Jump.

When you started out, who were some of the women athletes that motivated you and why?

There was no woman who inspired me back then. I grew up without role models but instead, people I never wanted to be like or end up like. However, I was inspired by Ntando Mahlangu, South Africa’s Paralympian, we were around the same age when he was already a para-athlete. From seeing what he did at his age, I also wanted to do the same and show everyone what I am capable of.

From your perspective, are we seeing a rise of para-athletes in SA? And if yes, who are some of the women athletes that you believe are the future for the country?

Yes, I am seeing the rise of para-athletes in SA. Some women athletes being Michelle Moganedi who plays wheelchair basketball and is a very close friend of mine and Charné Felix who I compete with in my 100m and Long-Jump events.

Being a para-athlete needs discipline and dedication. How important is this when you are an athlete?

Everyone else like your family, coach, sponsors, etc, can only help you professionally to an extent, so the discipline and dedication has to come from within you to actually be where you want to be.

Have you been receiving advice from fellow athletes to make the next step in your career? If yes, what advice have they shared with you?

I unfortunately haven’t been receiving any advice from fellow athletes to take the next step in my career. But I would be happy to hear from them because growth is important to me.

What are some of the challenges you have faced and how did you overcome them?

From when I started athletics, I hardly had any coach to help me work on what I needed to improve to be a greater athlete. I used to train with one of the occupational therapist from my previous school and she really played a big role that year – I broke the record for Long-Jump and was chosen to go IWAS (International Wheelchair and Amputee Sports) Games in Portugal 2017.

Unfortunately, she relocated to Cape Town, and it was only until last year that I didn’t have any coach. And now he has also left, and I am currently with another coach.

So, the transition from coach to no coach, then from one coach to a different coach was really a big challenge especially when they are still trying get their head around helping me, who has a disability and is different from others.

However, I believe in my current coach as he knows what he is doing, and I am trusting him with the program so I look forward to my first trials to qualify for Nationals.

What are some of your highlights in your career?

Throughout the years 2016-2019 I have competed in other sports such as wheelchair basketball and golf.

What kind of support are you receiving from your loved ones?

My family and close friends believe in me and encourage me with kind words when I feel like nothing is going well or in place in my life.

Apart from athletics, what else are you doing and how are you managing your time?

I am studying BCom in Human Resources at University of Johannesburg. I see a sports psychologist to see how I can manage my time between being a student and athlete at the same time. If I cannot make training on the time my coach set, I go in my own time and do what I was supposed to do according to the program. If I am not struggling in the module that clashes with training, I go to training and catch up with a classmate later. I try by all means to just balance academics and sports.

My greatest ambition is to compete at the Paralympics. I want to be one of the world’s greatest para-sprinter’s under T64.