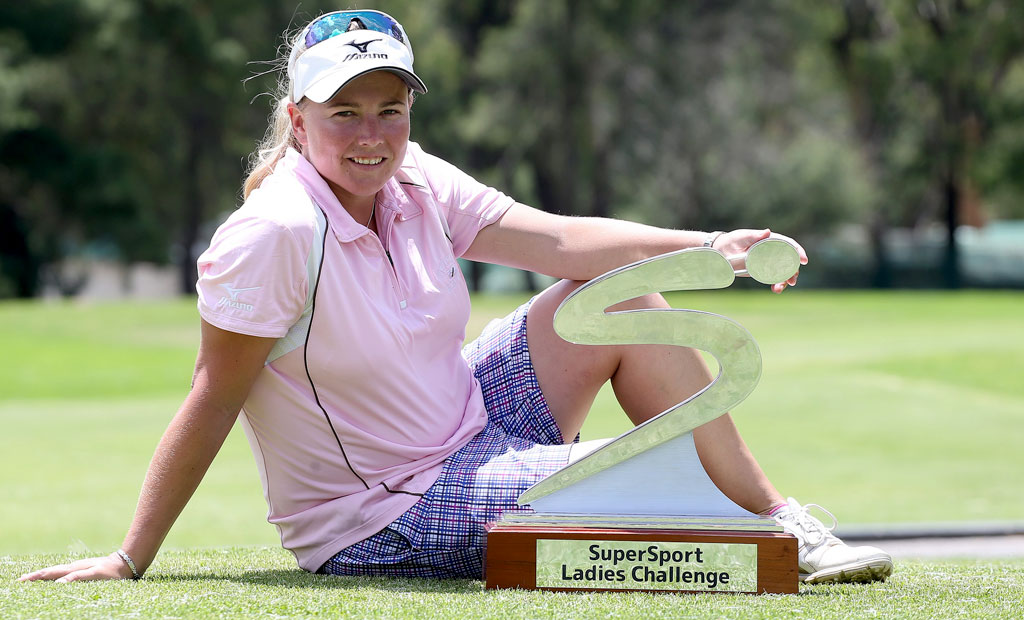 Kim Williams proved that class is permanent as she marched to victory in the 2017 Sunshine Ladies Tour season opener on Friday.

After three winless seasons, there were some who thought the former top ranked Pretoria golfer would never scale great heights again, but Williams silenced her critics with a one stroke victory in the SuperSport Ladies Challenge at Huddle Park Golf Club.

A three-under-par 68 at the pristine Linksfield course smoothed the way to a winning total of seven-under-par 209 and her first success since a maiden conquest in her pro debut in 2014.

A beaming Williams said she believes there is more to come.

“It came as a bit of a surprise to be honest, because my last competitive outing was 10 months ago,” Williams said.

“This was way, way overdue and now that the monkey is off my back, I’m eager to see what I can do for the rest of the season. We’ll be heading to Cape Town for the South African Women’s Masters in just over a week and then on to KZN for the SA Women’s Open.

“It’s awesome to take this momentum into the two national championships and to start the Chase to the Investec Cup for Ladies on a winning note. I was gutted when I missed the final last year, so this bodes well for my chances this year.”

The 30-year-old from Pretoria began the final round at four-under after successive rounds of 70.

She lagged three shots behind three-time Sunshine Ladies Tour winner Monique Smit and started the final 18 holes a stroke ahead of Kiran Matharu from England.

She shortened the gap with a birdie at the second and when Smit bogeyed the third, Williams pounced with another birdie to join the Southern Cape golfer in the front of the field. She took the outright lead at seven-under after a fourth birdie at the eighth, while Matharu quietly weaved her way into contention with birdies at one, six and nine.

Smit fell away after a double bogey at 10, but Williams three-putted from 10 feet and Matharu also surrendered a shot.

“Monique battled off the tees, which gave Kiran and me a chance to catch up,” said Williams. “Kiran showed all the experience of a decade on the Ladies European Tour and made almost no mistakes. I was relieved when she also dropped 10, but she stayed with me, though.”

Williams notched another gain at 14 and back-to-back birdies at 16 and 17 saw her head to the final hole with a two shot lead at eight under.

“This is one of the toughest holes on the course, so having a two shot cushion gave me some comfort,” she said. “I hit my second a little too long, but I had a pretty easy putt and then I quit on it and left myself a testing five-footer for par. I wasn’t going to get aggressive over that putt so I was happy to three-putt and take the win.

“The last three years have been tough, but I’ve always felt that if I could get in the mix, I could win again. Being back at the pro shop at Centurion Country Club has given me security and the chance to play golf, so this one is for the management, staff and members at Centurion.”

Meanwhile Melissa Eaton blitzed the back nine in 31 strokes to close with a four under 68 that sealed a runner-up finish at six under for the former Symetra Tour campaigner. Matharu also dropped the 18th but a 70 was good enough for a third place finish at five under in her Sunshine Ladies Tour debut.

KwaZulu-Natal golfer Michaela Fletcher – a student at the University of Memphis – closed with a 69 to finish fourth at two under and notched the leading amateur honour.