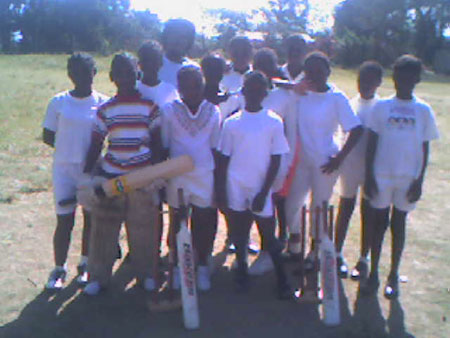 My name is Lunga Ntuli and I’m a 19-year-old boy from Groutville in the North Coast of KwaZulu Natal. I have a women’s cricket club called Nkobongo, which is participating in the Durban and District Cricket Union Women’s League.

My involvement with women’s cricket started when I was still at School doing grade 11 at Umlazi Comtech, where I formed a girl’s cricket team. One of the girls who I coached then was selected for KZN development U13 team in 2005. When I was doing grade 12, another girl was invited to attend at Kingsmead Academy.

After completing my matric in that year, I came back to my community, and thought that I should give back to them. So I took all the girls from the rural areas of Ilembe, and started coaching them.

Then I formed a team, which was affiliated under the Tongaat Cricket Union, and includes girls from the age of 11, and the eldest was 16 years of age.

They played in the competitive league against some Natal players, but that did not worry them because they continued playing up until the season was over.

Why girls cricket? This is the question that most people asked me, and the answer is boys have always been given the opportunity to play cricket, and as a result people regard cricket as a men’s sport.

Even at school, when it is a cricket season, girls are encouraged to play netball instead of cricket, and there are not enough structures which are designed for women’s cricket.

Last year when I formed Girls cricket at my primary school Sizani, I noticed so much talent. In townships there is a game called Ushumpu which is similar to cricket and I believe that every girl who can play Ushumpu can play cricket as well if given an opportunity.

The highlight of the team’s success is the selection of 13-year old Nelisiwe Ncama, who has been called up for the KZN U19 Girls Cricket squad.

Nelisiwe, who bats high up the order, started playing cricket last year, when I introduced cricket at her school Sizani. I just knew that she had talent, and with her commitment and hard work, good things are still to come for her.

It is not only her, but there are other girls who have talent, like Ongezwa who was the best batswoman in the Club’s Awards, and Andile, Sphume and many more.

The club has also signed some new players for the season, including Ntokozo, who is also in the u/19 team KZN, Nci and Nothando.

The club currently has no sponsors, and is seeking any form of sponsorship, ranging from cricket gear, t-shirts, balls, Kit, bags or cash, and if there is anyone willing to support the club and promote women in sport, please contact me on 078 338 0849, or email me at [email protected]