Mignon du Preez’s impressive numbers have forced the hands of the national selectors, who have called her up to the South African squad to face the touring Pakistani women’s national cricket team, following the unfortunate unavailability of injured captain Shandre Fritz.

Mignon is a seasoned club cricketer, but her sporting talents are demonstrated in this gifted 17-year-old sportswoman having achieved South African colours for U/17 Indoor Cricket, and Provincial colours for Softball, Hockey, Tumbling, Table Tennis, and Indoor Cricket.

She modestly admits a limited overs high score of 258 not-out, and doesn’t regard herself as a bowler, but her right-arm medium pace has claimed her career-best figures of 6/24 for her province during the past season against Limpopo.

With numbers as impressive as Mignon can boast, there’s every chance that she might earn her debut cap for South Africa during this tour.

All games of the tour will be played in the Pretoria region starting Saturday 20 January, following a warm-up game on Wednesday 17 January.

Mignon kindly met with gsport at Supersport Park in Centurion during the Proteas first test against the Pakistani men’s tour of South Africa, and told us a little about her.

Mignon, thanks very much for speaking to gsport.

It’s my great pleasure, thank you!

Where are you from?

So it’s nice to watch some cricket here at your home ground?

Who is your favourite Proteas player?

Actually, I enjoy all of them, they’re all great to look up to!

You’ve been called up to the squad to face Pakistan at the expense of injured captain, Shandre Fritz. How long have you been playing cricket?

Since I was four years old, so it’s been 13 years now.

What are your strengths in cricket?

I’m mostly a batswoman, and that’s what I prefer doing. And a fielder, obviously…

Where do you field, generally?

You’ve brought yourself to the attention of the national selectors, how did that come about?

I’ve just been playing as well as I can, for as long as I can. When I get out there, (I try to) spend time in the middle, and hopefully they get to notice you.

Which club to you play cricket for?

For Gauteng North Open Ladies team, and at school, I play in the first team.

How long have you been in the Gauteng North team?

I’ve been playing for Gauteng North since I was nine years old (in the under-13 team), and this is my third year for the Open ladies.

Batting being your major strength, what is your average?

During the previous season, it was 58.

You must be delighted to have made it into the squad. Hopefully you’[ll get your debut cap against Pakistan, do you know anything about their team?

To be honest, not much at all. Hopefully when we get there, our coach will tell us about our strategies…

We played a few matches, we had some fitness tests, and just practice and stuff. Yeah, and some team meetings …

Who do you get on the best with in the squad?

Actually, this will be my first time, so I’ll get to know them all once I get there. But the whole team is a great bunch of girls.

Well, we at gsport wish you all the best for the tour! 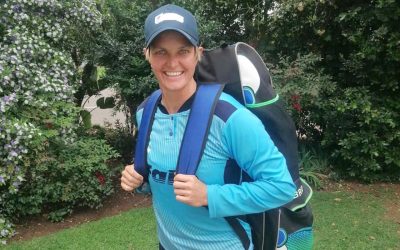