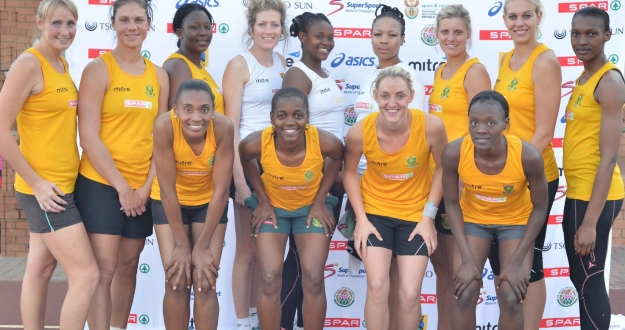 Some familiar faces have returned to the SPAR National Netball Team announced by Netball South Africa (NSA) on Wednesday.

“We’ve chosen a very strong and mature team for the African Championships in Malawi,” said head coach Elize Kotze. “We’re delighted to welcome back players like Yolandi Saalmans, who played for South Africa as long ago as 2006, and Nontle Gwavu,” she said.

“Yolandi, who is married now and has a child, has been to a couple of training camps and has done very well. She’s very talented and committed, and has a lot of experience, which will be very valuable. She is extremely fit – in fact, she ranked third when we tested the players’ fitness at our training camp in Potchefstroom last weekend.

“Mimi Mthethwa, President NSA, said that they were happy to have found another specialist wing attack in Yolandi, as Nadia Uys is still struggling with an injury.

“I’m also very pleased that Nontle has come back and has shown that she is keen to play for South Africa again. I think it’s a compliment that these semi-retired players are coming back.”

A number of senior members of the national team were unavailable for selection, either because of injury or work commitments, but Kotze was happy with the team selected. “It’s also wonderful to have Erin Burger (Player of the Tournament at the 2011 World Netball Championships) back in the team, after recovering from injury.

“She is such a versatile player and has so much talent that she always makes a difference,” said Kotze.

The coach said the experience the SPAR Proteas gained from playing in the Quad Series against Australia, New Zealand and England last year was proving invaluable. “They moved to a different level, as far as their thinking and decision-making is concerned,” she said.

“They have been growing with every training camp, and they are really ready to take on the best Africa has to offer. Tournaments in Africa are always tough – conditions are often difficult, and the players can be very physical and unpredictable. But the Proteas played the best in the world last year, and came back with their heads held high,” she said.

There is only one new cap in the team, with Colleen Ferreira coming in as goalshooter. “Melissa Myburgh and Chrisna Bootha have both been out with injury, and so we have brought Colleen in. She’s an extremely physical player, and will certainly be able to stand her ground against any other player,” said Kotze.

“Colleen was previously ranked 4th on the squad’s list of shooters by selectors at the last SPAR National Championships, and so was invited to the training camp, where she proved herself as a player for selection for the African Championships.”

Maryka Holtzhausen will captain the team, in the absence of Amanda Mynhardt, who is playing netball in New Zealand, and Bongiwe Msomi has been named vice-captain.

The championships start on Monday and end on Saturday.