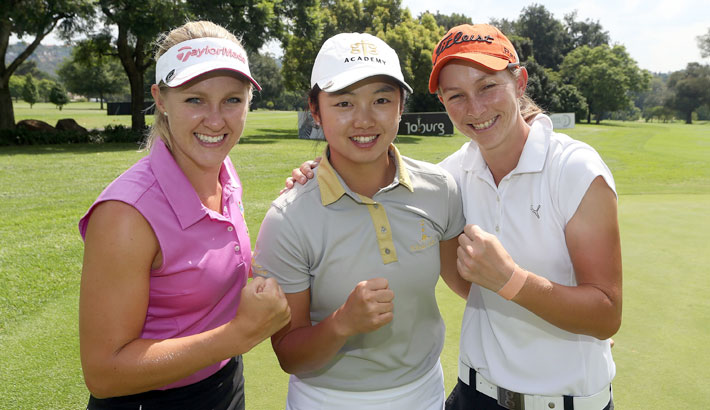 These names have dominated the leaderboards since the Sunshine Ladies Tour launched 2014, but the Big Three better make some space for the arrival of the new kids on the block.

LPGA Tour rookie Bertine Strauss and Sunshine Ladies Tour rookies Lejan Lewthwaite and Carrie Park were out in force at the West Course on Sunday in the practice round for the Ladies Joburg Open, which kicks off at the Royal Johannesburg and Kensington Golf Club’s West Course on Monday.

The trio mean business and they are not bashful about it. “I am definitely looking to start with a bang,” said Strauss.

“I missed the start of the season because the SA Women’s Open clashed with the Final Stage Qualifier for the LPGA Tour. I need a win this week to get my foot on the ladder in the Chase to the Investec Cup for Ladies.”

Strauss dominated the local amateur scene before she took up a four-year golf scholarship at the University of Texas in 2011.

She led the University of Texas Longhorns to 10 top-10 team finishes, earned six top-10s finishes and picked up a first career win at the Ping/ASU Invitational in her senior year and, after graduating with a major in Psychology and a minor in Business Administration, snared her first pro cheque on the SunCoast Pro Tour just a week before she won the First Stage of the LPGA Q-School.

Strauss secured her card for the 2016 LPGA Tour at the Final Stage Qualifier and is primed to make a strong first impression on the Sunshine Ladies Tour.

“Lejan and I can tell you that playing the US college circuit toughens you up,” Strauss said. “And, after fighting my way through three stages at the LPGA Q-School, I don’t scare easily. I expect a real battle with Lee-Anne, Ashleigh and Stacy, but I’m ready to take them on.”

Lewthwaite, who edged out Park for second in the SA Women’s Open, is equally excited to get her pro debut underway.

“I really want to make that final cut for the Chase to the Investec Cup for Ladies, so I am looking for a fast start this week,” said the 24-year-old Texas State University graduate, who earned 320 points for her runner-up finish at San Lameer.

“That third place at San Lameer left me really fired up,” the petite South Korean said. “It was fantastic to play against Lee-Anne and Lejan and this week Stacy and Ashleigh are also in the field, so it’s going to be really exciting. I can’t wait to get going.”

Unbeaten in her last six starts on the Sunshine Ladies Tour, Pace will be hunting her third successive Chase to the Investec Cup for Ladies title this season.

“I look forward to Bertine joining us this year and we also have other rookies like Lejan Lewthwaite and Carrie Park, who both performed really well at the SA Women’s Open,” Pace said. “I think it’s fantastic to have all this new blood because they will heighten the competition and add to the excitement of the Chase to the Investec Cup for Ladies.

“We have a huge pot to play for this year and with a R1-million bonus pool up for grabs at the end of the Tour, everyone will step up their games. The rookies are hungry, so they will really keep us on our toes over the next few weeks.”