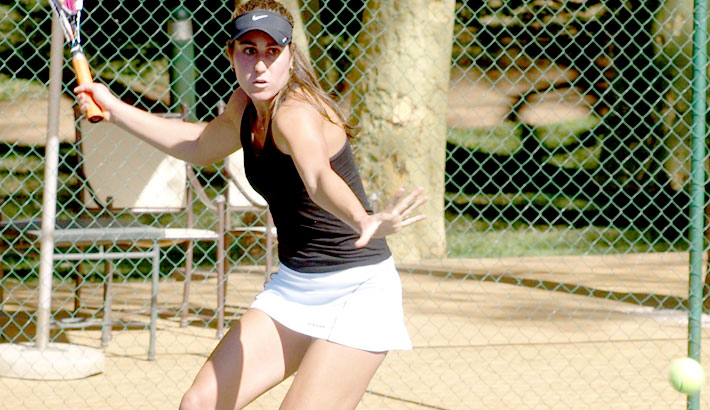 The seeded players battled on court at Sun City in round two of the Sun City Futures 2 on Wednesday, with women’s singles top seed Chanel Simmonds in devastating form – losing only one game in her 56-minute 6-0 6-1 whipping of fellow countrywoman Caitlin Herb.

After a great day on Tuesday for the Barnard twins, Wednesday proved dooms day for the sisters, when Lee Barnard joined her sister on the sidelines after being beaten 3-6 3-6 by unseeded South African Lenice van Eyk, who has reached her first Futures quarter final berth.

Third seeded Madrie le Roux (RSA) had to come from behind to beat unseeded Vanja Klaric of Serbia 2-6 7-5 6-3. Klaric, a surprise semifinalist last week is a good friend of Le Roux as they both train out of the Riaan Venter Tennis Academy at NWU-PUKKE in Potchefstroom.

Coach of both Le Roux and Klaric, Riaan Venter said watching his charges play against each other was a “nerve wracking affair”.

“It’s never easy sitting on the sidelines watch your players battle against each other. Vanja played a great game, handles the pace from Madrie well and positioned herself smartly today. Madrie was forced after losing the first set to play smarter, slow the ball down and vary the pace which rattled Vanja as she likes to play with the pace of her opponent.”

Le Roux will play “giant-killer” Nicole Dzenga of Zimbabwe for a place in the last four.

Main Photo Caption: Natasha Fourouclas of South Africa in action in round 2 of the Sun City Futures 2 being played in the North West Province. Fourouclas beat fellow South African unseeded Nadine de Villiers 6-2 6-1 to move to the quarterfinals to be played on Thursday. Photo: BLD Communications.