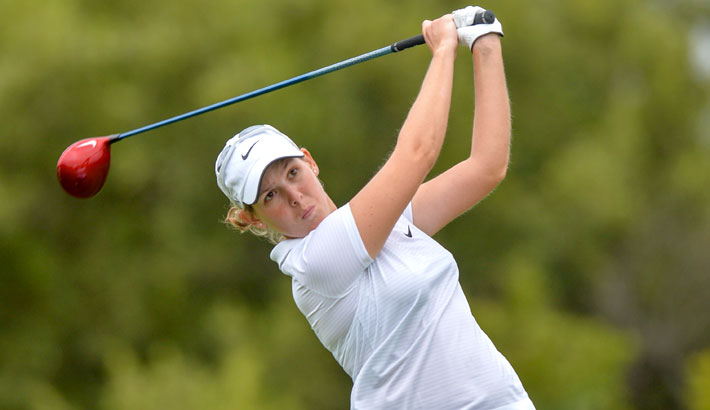 Simon and Pace Tee Up at Tough Evian Champs

Investec Cup for Ladies champion Lee-Anne Pace and three-time Sunshine Ladies Tour winner Ashleigh Simon will join a world class field at the Evian Championship, which tees off in France on Thursday.

The South African pair have campaigned mainly on the LPGA Tour this season, but are primed action in the season’s final Major at the Evian Resort Golf Club.

Although Pace missed the cut at the Kraft Nabisco Championship and LPGA Championship, the former LET number one followed a tie for 29th at the Ricoh British Women’s Open with a career-best tie for 43rd at the US Women’s Open, and ranks 62nd on the LPGA Tour Money List.

Pace rose to seventh on the LET’s Order of Merit following a runner-up finish as the Sberbank Golf Masters last month, and is hunting another solid finish in Évian-les-Bains to improve her standing on both sides of the Atlantic Ocean.

“This has been one of my favourite tournaments and places to visit for years and I am really looking forward to this week,” the Pearl Valley golfer said. “I took a short break from the LPGA Tour and arrived in Europe two weeks ago. I spent some time with my coach, James Petts, and caddied for Anna-Lise (Caudal) at the Scottish Open last week.

“James and I worked on a few things, and I’m really happy with where my game is at ahead of the season’s last Major.”

Simon cracked the LPGA Tour’s top 100 with a tie for 40th at the LPGA Championship in August and is also keen to boost her ranking with a solid performance this week. The two-time LET champion last qualified for Evian Championship in 2011 and liked the look of the redesigned course.

“They kept some holes the same and changed others, but they redid all the greens and fairways and the course is playing incredibly long,” Simon said.

“On many holes, the fairways slope either right to left or left to right and towards bunkers. You will have to make sure you hit your drives up the correct side.”

Simon believes accuracy will be the most critical factor this week. “You will have to be very accurate with your placement off the tee and into the greens this week, because the greens are just crazy,” she said.

“These have to be the most undulating greens I’ve ever played. You will have to be long on patience, too, because there are not many pins you can attack. You might be left with a couple of long putts this week and that is going to test the patience.”

Meanwhile reigning Zambia Ladies Open champion Stacy Bregman may have missed out on a spot in the field, but the Joburg pro will have a bird’s eye view of the action.

The Joburg pro will be on the bag of Australian Nikki Campbell, who makes her debut in the final Major.

Photo 1 caption: Three-time Sunshine Ladies Tour winner Ashleigh Simon is keen for a difficult Evian Championship, noting that all the fairways and greens have been redone, and believes accuracy and patience will be the most critical factors this week. Photo: Catherine Kotze / SASPA

Photo 2 caption: Investec Cup for Ladies champion Lee-Anne Pace has taken a short break from the LPGA Tour to some time with her coach, James Petts. “I’m really happy with where my game is at ahead of the season’s last Major,” said Pace. Photo: Catherine Kotze / SASPA