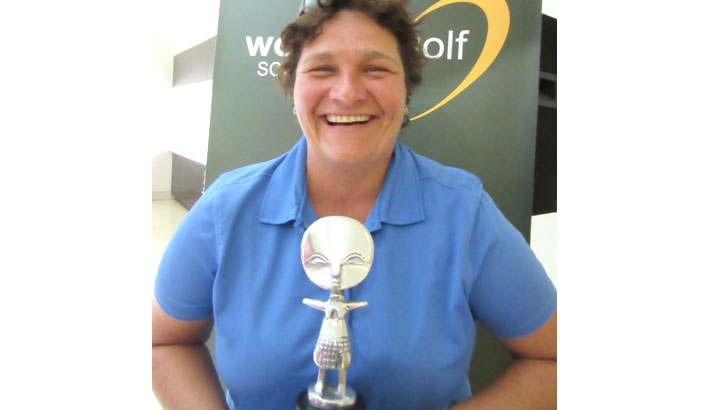 The Milnerton mid-amateur took the lead with an opening 74, but registered an unsatisfactory 84 in the second round that cut her eight shot advantage to just four strokes.

Smith made the trip to Pretoria a memorable one when she showed the chasing pack her heels with a closing 76, to seal a runaway nine stroke victory in the Championship Division with a winning total of 14-over-par 236.

The triumph followed closely on her recent triumph at the Boland Women’s Mid-Amateur and caps a solid season for Smith.

“I’m absolutely delighted to add this title to my national tally,” said the 36-year-old former professional.

“This victory means so much to me. I really wanted to win this title and I prepared well for the championship. But the older you get, the harder it gets and it don’t think it could any harder than this week.”

Although her final total was well over the target she set herself at the start of the week, Smith was nevertheless thrilled with the outcome.

“After the first round, I thought six over was a reasonable target, but the second round just killed me,” Smith said.

“I struggled to get going and was five over by the time she reached the turn. We were called off and sat around for nearly two hours to wait out the lightning. After the break, I just couldn’t get things going and the bogeys just added up.

“I still had a four shot lead, but I knew I would have to limit my mistakes in the final round. Liezl (Smit) and Jane (Mackenzie) came at me hard on the front nine, but by the time we reached the turn, I was pretty confident that I could win it.

“The course played incredibly long and I still had five bogeys on my card, but I can’t tell you how wonderful it was to finally knock in a birdie putt at the 17th. And finishing with a par at the 18th was just the icing on the cake. This is a victory I will cherish for a very long time to come.”

Bland closed with an 81, while former professional MacKenzie from Ladysmith signed for a final round 84.

The B-Division battle was hotly contested, with the lead changing hands several time and went right down the wire.

Wendy Carruthers from KwaZulu-Natal rallied with three pars before the turn to join the challenge and held off a spirited charge down the back nine from Marinda Pretorius, Esta Tennent and overnight leader Erica Millican to close with an 85 for a one stroke victory on on 269.

Pretorius and Tennnent both registered 88s, while Millican carded 95 to claim a share of second on 270.

Gauteng North’s Piret Vilborn claimed a home victory in the C-Division. The Centurion golfer closed with 35 points to lift the title with 90 points. Vilborn finished five points clear of North West’s Janine Meyburgh, who collected 33 points in the final round to vault to second on her own.