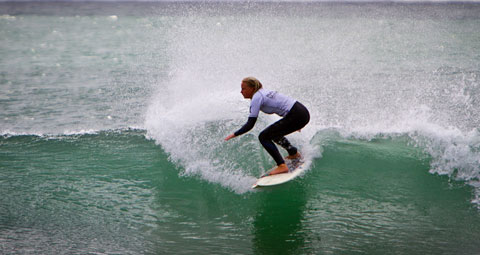 J-Bay local Gina Smith and Crystal Hulett claimed two of the three individual girls’ titles to help Eastern Province dominate the Hurley SA Junior Champs in their home surf at Jeffreys Bay on Sunday, 7 October 2012, clinching the coveted Freedom Cup team trophy for the first time in the 16 year history of the event.

South Africa’s premier event for surfers aged17-and-under ended on Sunday after enjoying a phenomenal five straight days of excellent surf at the Point, with offshore winds every day grooming the waves and giving the competitors the every opportunity to showcase their talent.

J-Bay local Gina Smith (EP) went unbeaten throughout the event, going on the be crowned the SA U17 girls champion ahead of Inge McLaren (Border), teammate and last year’s U15 champion Tahra Uren (EP) and Caryn McNicol (KZNC).

The U15 girls’ final was a closely fought affair and when the spray settled Crystal Hulett (EP) was the champion with Chanelle Botha (SKZN) close behind and Olivia Brand (KZNC) and Ruth Armstrong (WP) placing third and fourth.

The U13 girls’ title went to Sophie Bell (KZNC) who racked up a massive 15.0 points to deny Kai Woolf (EP) a second successive title in her home surf. Ashleigh Vaughan finished ahead of Danica Stockigt (Border) in the final to grab third place.

The Skullcandy Team Spirit award was presented to Eastern Province whose enthusiasm and support for their teammates paid off with team and individual honours that will go down in the annals of SA surfing history.