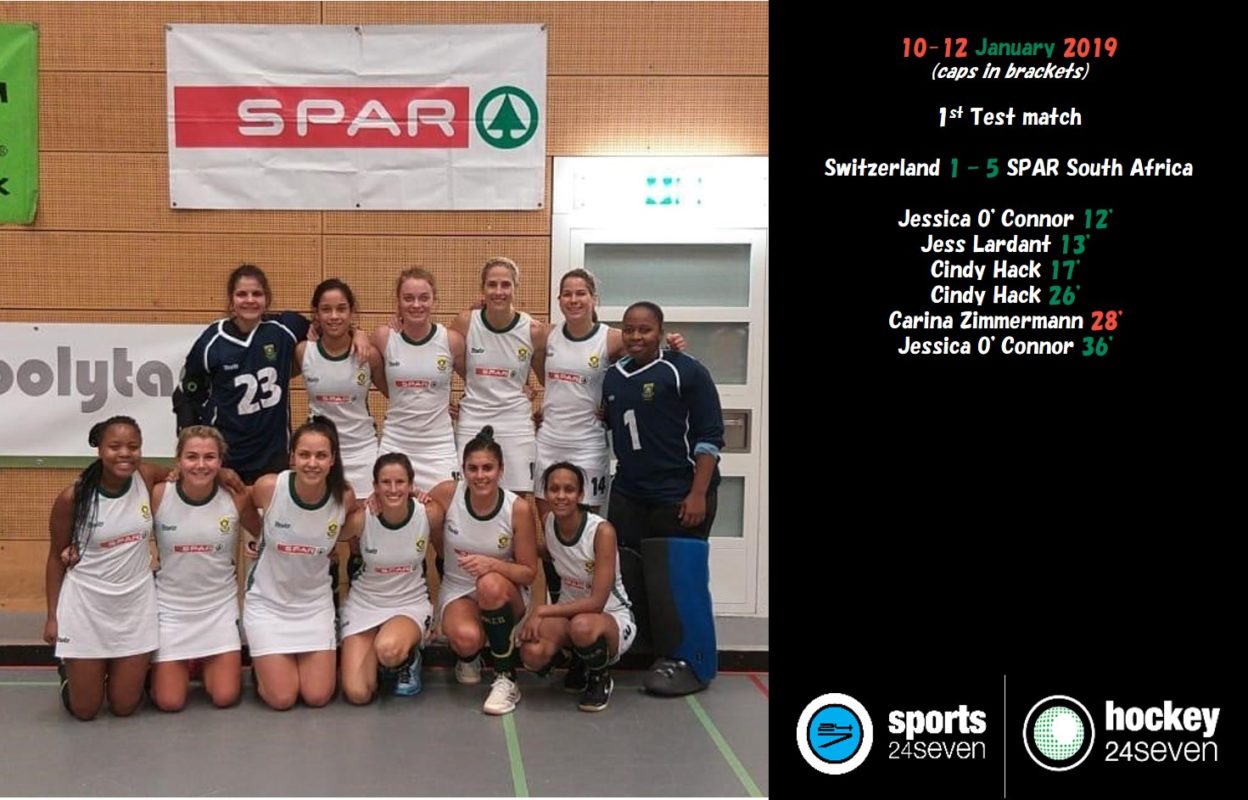 SPAR South Africa arrived in Switzerland on the back of an unbeaten 25 match test run. Of course, it has been a tough journey for the team after missing out on the FIH Indoor Hockey World Cup. They can only be credited for their response, working hard and focusing on building towards future goals.

This tour to Switzerland and Czech Republic would be SPAR South Africa’s biggest test so far. A year ago, at the FIH Indoor Hockey World Cup, Switzerland produced an outstanding display to finish 5th. The highlight of their run was a brilliant victory against Poland, who were ranked 4th at the time. The run also saw Switzerland reach an all-time high ranking of 7th in the World. To top it off South Africa had never beaten a top 10 ranked country outside of South Africa and never beaten a team ranked higher than 8th in the World. It was set to be a titanic tussle.

Switzerland featured four of the Indoor World Cup team in the opening game against a South African side seeing Andrea Leader earn her first cap and Cindy Hack her 73rd. It was South Africa who struck first through a penalty corner from Jessica O’Connor in the 12th minute. A hallmark of Lennie Botha’s side has been their ability to hit two quick goals back-to-back. This characteristic took centre stage once again when Jess Lardant made it 2-0 in the 13th from another penalty corner.

Cindy Hack, playing arguably the best hockey of her career, and leading from the front converted a goal from open play to give South Africa a 3-goal lead at the break. If the hosts were expecting the South Africans to back off they were in for a surprise as the South Africans burst forward and extended the lead through Hack once again finishing off a team move to make it 4-0.

Switzerland then gave themselves a glimmer of hope when Carina Zimmerman, playing in her third test match, pulled a goal back for the hosts. But any hope of a fight back was doused by a stellar defensive performance by the South Africans and crowned by Jess O’Connor, who opened the scoring, netting the game’s final goal in the 36th minute.

Cindy Hack said after the game:

“It was a superb effort from my team. We really executed the game plan well and kept up our concentration in the key moments.”

The result gave SPAR South Africa a fantastic 1-0 lead in the five-match series and will give the team great hope on securing a series victory, which would have been a hopeful goal before the tour got underway.