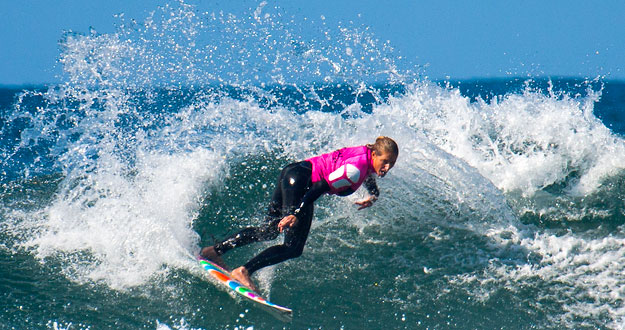 Performance levels ramped up on Day 3 of the Cool Shoe South African Surfing Championships as ideal one metre waves, hot weather and light onshore winds at New Pier in Durban saw the top contenders for national titles press their claims for honours at the business end of the event on Saturday.

The finalists for the U20 Girls’ and Women’s divisions were decided on Saturday, leaving just the finals to be run on Sunday before the champions are crowned.

Nikita Robb (Border) remained on track to defend her SA Women’s title when she dominated her semi-final, leading from start to finish to move into the final along with second-placed Heather Clark (Southern KZN). They will be up against Lynne Mackey (KZN Central), who used her local knowledge to clinch her semi ahead of national team member Tanika Hoffman (Western Province).

Chanelle Botha (SKZN) and Anoush Zakarian (Boland), both of who represented South African in the U16 division at the recent ISA World Junior Championships in Panama, finished first and second in their U20 Girls semi and will be joined in the final by Nicole Pallet (KZNC) and Emma Smith (Eastern Province) who represented SA at U18 level in Panama.

After three days of action the team title and possession of the highly prized President’s Cup is still wide open. Southern KZN’s dominance of the Men’s division plus a representative in each of the Women’s and Girls’ could swing the result their way while WP, with four team members still in contention are their closest challengers, followed by EP and hosts KZNC with three each and Border and Boland with two each.

The U20 Boys and Men’s semi-finals begin Sunday’s final day of action at the Cool Shoe SA Surfing champs at 7:30am to take advantage of the morning’s higher tide, after which the finals in all four divisions are run.

The event concludes with an awards ceremony on the beach where the 2013 Cool Shoe SA Champions will be crowned, the Surfer of the Contest will be named and the country’s top provincial team will be presented with the President’s Cup.

All the results and the schedule for each day of the event can be found at www.surfingsouthafrica.co.za.