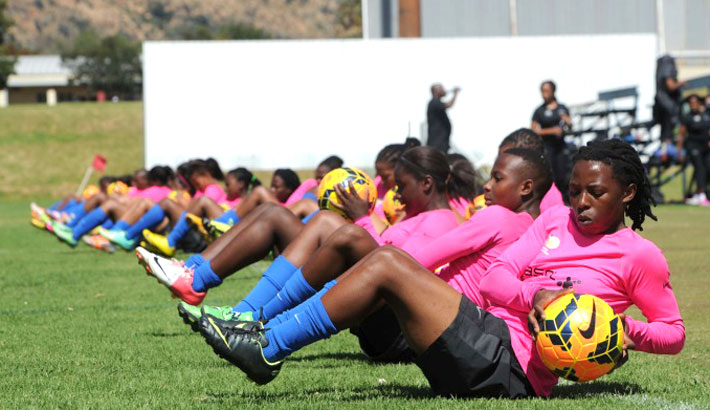 Banyana Banyana’s preparations for the crucial 2016 Rio Olympic qualifier against Equatorial Guinea are in full swing ahead of the first leg clash at Makhulong Stadium in Tembisa, Johannesburg, on Saturday, 3 October 2015. (Free Entry, KO: 15h00).

The SASOL-sponsored Banyana Banyana are back in camp after taking just one week break after their participation in the 2015 African Games held recently in Brazzaville, Congo where they were eliminated through the toss of a coin.

“I must admit after playing Kenya at the beginning of August we would have been rusty going into such an important fixture, but the three matches we played in Congo have kept the players in shape, and we were also able to come up with new strategies to face Equatorial Guinea.

“The good thing also is that we returned from Congo without injuries so we have had all the players training, which helps with our preparations and we are able focus on our plans instead of attending to injured players.”

Banyana Banyana know what to expect from the Central African opponents who beat African powerhouse Nigeria to reach the final qualifier.

“We know that most of their players who went to the 2011 FIFA Women’s World Cup in Germany are part of the current squad, and those are more or less the same players that defeated Nigeria.

“We expect them to play very attacking football, more like European-style as most of them don’t play in Equatorial Guinea. But we are ready,” added Pauw.

The bulk of the Equatorial Guinea players that played and beat Nigeria are based in Brazil with the others spread in Spain, England, USA and Lithuania. Only three play their football in Equatorial Guinea.

Meanwhile, all the Banyana Banyana players have reported for national team duty with the exception of the USA-based duo of striker Jermaine Seoposenwe and defender Kelso Peskin. Seoposenwe is expected later on Wednesday, 30 September while Peskin will land in South Africa on Thursday, 1 October.

In further demonstrating their support for women’s football, for the first time SASOL, sponsor of Banyana Banyana are introducing a cash reward for the Diski Queen of the Match.

SASOL Group Sponsorship Manager, Richard Hughes explained: “Our partnership with SAFA over the past seven years has enabled us to support government’s transformation and gender equity agendas, using sport as a vehicle to do so.

“We are therefore proud to further demonstrate our commitment to achieving this, by announcing that we will award the Diski Queen of the Match with a R5,000.00 cash prize for all home games, in addition to the trophy usually received.

“All along, cash incentives have been awarded only to their male counterparts, and we are happy to be pioneers of change in women’s football. Introducing this cash prize is a way of leveling the playing field and a key step to achieving gender equity in sport,” concluded Hughes.