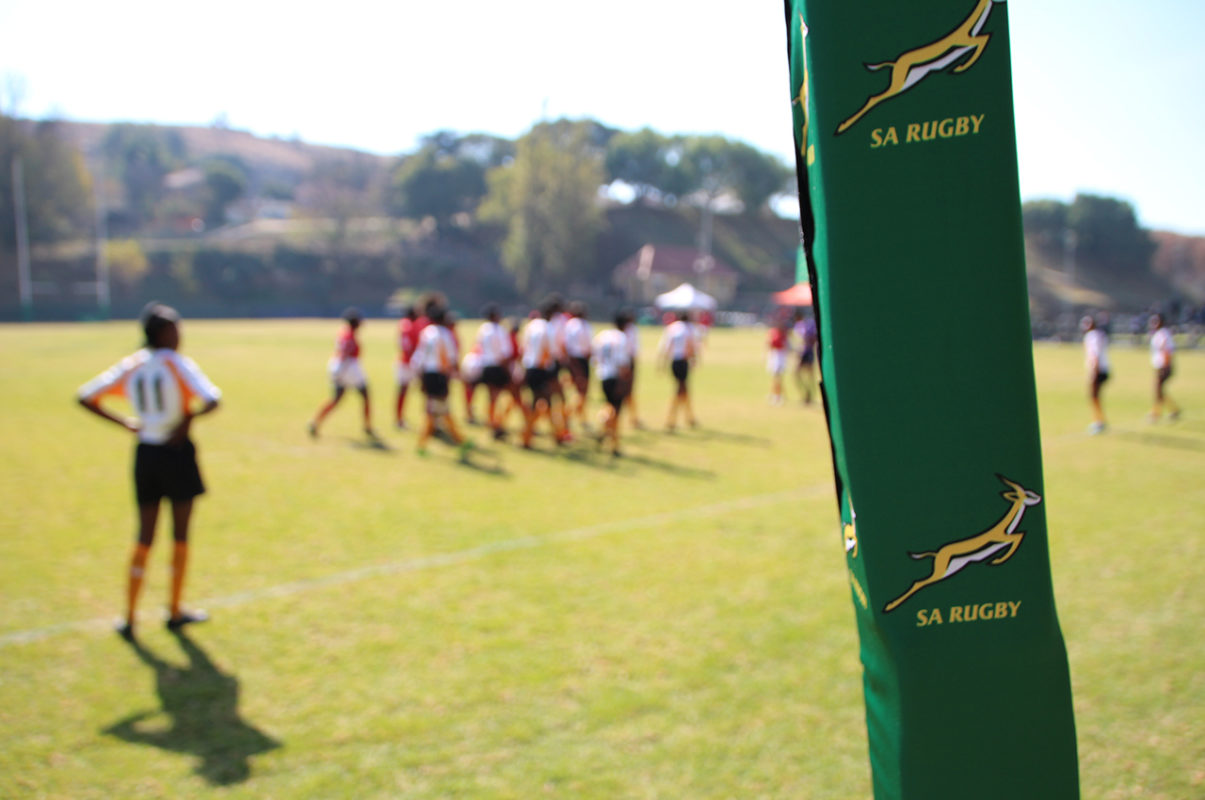 South African Rugby Union kicked off the 10th edition of the Under-16 and Under-18 SA Girls Rugby week tournament on Monday morning at Jeppe High School for Boys, in Kensington, Johannesburg.

The girls’ tournament which consist of 32 teams featuring more than 700 children, who hail from across South Africa’s nine provinces, and the games will continue until Friday, 21 June.

The U/16s were the first batch to take to the field as their older sisters, U/18s cheered from the stands.

Speaking to gsport, tournament director, Yusuf Jackson, spoke about the development strength of SA girls’ rugby and how its standard continues to grow.

“The part of the process is having a national women’s structure being represented here.” – Yusuf Jackson

“Ultimately, one of the reasons platforms such as this tournament are created is to test junior girls to determine if they have what it takes to make it to the U/20,” continued Jackson.

“The part of the process is having a national women’s structure being represented here. Their aim and objective to identify talent for them to nurture the talent with hopes that the girls will don the green and gold in the future”.

Newly appointed U/20 women’s rugby head coach and the first-ever woman to coach a national rugby team, Laurian Johannes graced the event with her presence, and chatted about expectations of the one-week event, saying that she believes that such tournaments have the ability to produce future Springbok women’s stars.

“And, with whatever challenges they girls face, they must not be scared to ask for help as there are unions that are always willing to help and always eager to lend a helping hand.” – Luarian Johannes, SA U20 Women Rugby Coach

“This a great opportunity for the girls to showcase their talent. This youth league has been running for years, and this is a great exposure for women’s rugby as a whole”.

“I’m hoping to see a lot of talent, a lot of girls to come through the rugby system, and their hunger, skills and passion will be displayed in the field.”

“The girls must keep doing what they are doing,” said Johannes. “There are struggles in life, and, with whatever challenges they girls face, they must not be scared to ask for help, as there are unions that are always willing to help and always eager to lend a helping hand.”

“All our provinces are represented here and it’s also wonderful to having our African neighbouring country, Zimbabwe participating in this tournament”.

“They must tell themselves and believe that one day they will represent women’s team at a senior level and make it big in rugby sport.” – Phumeza Gadu, SARU Referee

Former Springbok Women’s Rugby player Phumeza Gadu, who forms part of the 15 female referees for this tournament, spoke about what it means for her to be part of such a prestigious event as a first-time referee.

“It’s my first time officially refereeing and I’m looking forward to learning from the other experienced women that have paved the way for us. I also want to learn all the proper refereeing ropes”.

Phumeza also shared some words of encouragement for the young girls who wish and dream of donning the famous green and gold for the Springbok women’s team in years to come.

“Don’t let your challenges discourage you from dreaming big. They must tell themselves and believe that one day they will represent women’s team at a senior level and make it big in rugby sport. I wish them all the best and may they never lose faith”.

Mandisa Williams, the former Springbok Women’s captain who has been assigned as Selector for the week’s rugby youth games, expressed what SA Rugby is hoping to achieve by the time the tournament wraps up on Friday.

“We are looking at the girls’ individual performance in terms of ability, mobility, goal carrying, having good art, defence, work rate and must be able to deliver in their positions.” – Mandisa Williams

“It’s so exciting to be here, and these girls remind me of my playing days, playing with passion and from the heart. I belong here, I’m an integral part of this event. It’s a great feeling and a good development for the girls.”

“We are looking at the girls’ individual performance in terms of ability, mobility, goal carrying, having good art, defence, work rate, and they must be able to deliver in their positions.”

“The girls must work hard and remain humble. We will be here on Wednesday to give the girls motivational talks, to inspire the girls. I’m where I am today, having started as young rugby player.”

Caption 1 option:The SA Rugby U/16 And U18 Girls Week has officially kicked off, at Jeppe High School for Boys in Kensington, Johannesburg. Photo: gsport

Caption 2 option:With more than 700 players in 32 teams representing South Africa’s nine provinces, the tournament presents an opportunity to girls wanting to pursue a career in any of the various routes offered to women’s rugby. Photo: gsport

Caption 4 option: Williams explained that SA Rugby will be assessing individual performance in terms of ability, mobility, goal carrying, having good art, defence, work rate, and the ability to deliver in their positions. Photo: gsport

Caption 5 option:The tournament will finish on Friday, when the best teams and individual performances will be recognised on the biggest stage open to South African school girls who love rugby. Photo: gsport