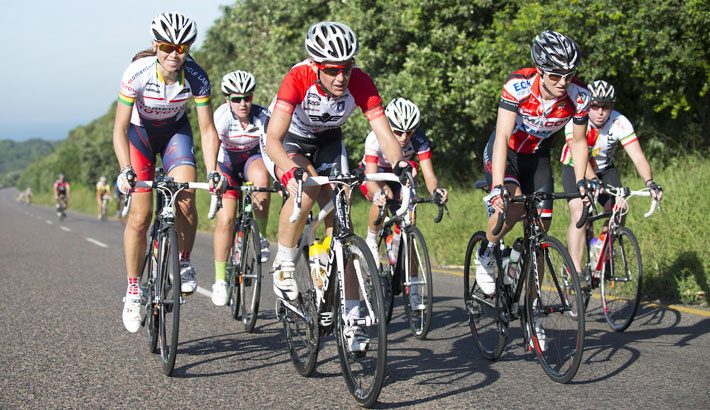 There will be a new name engraved on the women’s trophy for the 105km aQuellé Tour Durban road race on Monday 28 April, as double champion Lynette Burger will be watching from the sidelines, expecting her first child in three week’s time.

“I am taking a step back from everything, so you won’t see my name on the start list this year,” said Burger, who captained the successful Momentum Toyota that recently disbanded.

“I did “re-tire” at the end of last year to start a family, so that is my focus for now,” she added. “I hope to be back in a couple of years.”

Burger’s absence and the disbanding of the Momentum Toyota team that dominated the race last year, claiming three of the top four placings with Leandri du Toit and Anri Coetzee, has left the door wide open in the women’s race.

Last year’s second placed Marissa Stander, who raced in Bestmed colours is also absent, along with the consistent Cashandra Slingerland.

Last year’s sprint hotspot winner Heidi Dalton is back for another crack at the women’s race, and with her recognised strengths as a climber, she may well play her hand on the climb up to Pinetown midway through the race.

The strongest challenge for the 2014 women’s honours looks set to come from the locally based Time Freight VELOLife team, skippered by Lise Olivier, who, with only one failed attempt at the aQuellé Tour Durban to her credit, may well find herself being set up for the end sprint for the women’s title.

While she is happy with her role as the mentor of the squad and the senior pro in Johann Wykerd’s new team, Olivier is also fully aware that any one of the other youngsters might find themselves in a better position to challenge, once the race turns back towards the finish at the Moses Mabhida stadium.

“We are all competitive and we would love to win this race,” says Olivier. “It looks like we will start with a team of six for the race, and it is hard to say at this stage who we will try and set up for the win.

“Everyone is committed to the team cause, and what I like about the positive vibe is that the younger riders will ask if they can attack and not feel the pressure of expectations,” she added. “It is exciting that we have quite a few cards that we can play in the race.”

In all likelihood Olivier will lead a team made up of Annemie Kruger, Hazel Magill, Ashleigh Moffatt, Frankie du Toit, Alexandra Mapstone, and Carla van Huyssteen.

By the close of normal entries 341 women’s had entered the 105km road race, and a steady stream of late entries was being processed at the race office.

Photo 1 caption: The 2014 aQuellé Tour will see a new women’s champ, with defending champ Lynette Burger – winner of the 2012 and 2013 titles (far right), expecting her first child in three week’s time. Only Heidi Dalton is returning of the dominant women riders at last year’s aQuellé Tour Durban, leaving the door open for a new champion to be crowned on Monday 28 April. Photo: Anthony Grote/Gameplan Media