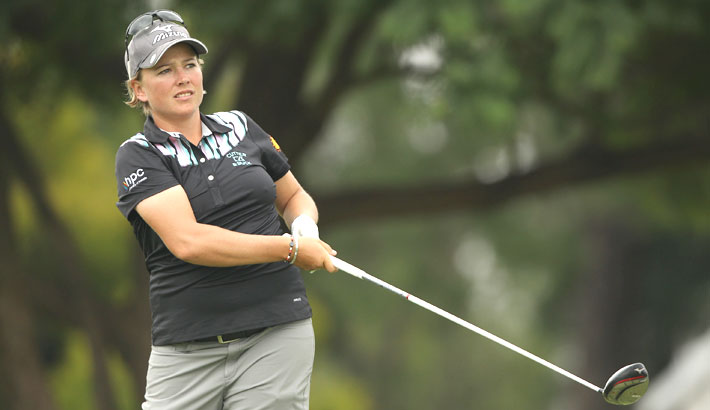 Sunshine Ladies Tour winner Kim Williams enjoyed a fortuitous gear change to the paid ranks in January when she claimed the season-opening Chase to the Investec Cup for Ladies at Houghton.

Six months into her rookie year on the Ladies European Tour, the 27-year-old Pretoria professional has risen to 60th in the rankings and has pocketed nearly €10,000 in four starts.

Williams posted a top 30 finish in her LET debut at the Lalla Meryem Cup in Morocco, jetted back to Africa to claim a joint runner-up finish at the inaugural Zambia Ladies Open and tied for 55th at the Turkish Airlines Ladies Open.

Solid beginnings, but it was at the Deloitte Ladies Open in Holland that Williams really put her talent on show.

She opened with a two over 75 in perfect conditions at The International in Amsterdam, and rallied with a flawless four-under-par 69 in gusty conditions to finish within striking distance of Scotland’s Kylie Walker at the 36-hole mark. Although she finished 12th, Williams was pleased with her performance.

“This rookie year is a big learning curve, so anytime I can put myself in contention, it’s a huge bonus on the experience scale,” Williams said after her first trip to the Netherlands. “The key to success in Europe is definitely to stay patient and to play percentage golf.

“You have to know when to get aggressive and when to go on the defence. You learn through trial and error and you improve as you start to get to know the courses, the conditions and the set-up.

“I did that really well in the second round at The International. I only missed only two fairways and three greens. I kept it in play on a touch scoring day and I need to pull off more rounds like. But I realise that I need to the experience, so I try not to get too frustrated.”

While Williams has enjoyed the ecstasy of earning cheques, she had to come to terms with the deflation that follows a missed cut, as well.

“We had a couple of weeks off and I had a great time at home,” she said. “I went back to Europe all buoyed up, and then I missed my first cut in Slovakia.

“It was so disheartening. I missed cuts as an amateur, but to miss the cut by one stroke was the toughest pill for me to swallow. You can’t help it; you agonise over the ‘what ifs’…the missed putts, the bad tee shots. It’s demoralizing.

“I’m so thankful that I have a fantastic sponsor in Paul (van der Schyff) from Sunlight Solar. He supports me whether I make a cut or not. It’s great to have him on my side and even greater when I play well and can show him his support is warranted.”

Williams returns to action this weekend in the €250,000 Italian Open at the Perugia Golf Club alongside Monique Smit, who captured the Dimension Ladies Pro-Am and SuperSport Challenge and Zambia Ladies Open champion, Stacy Lee Bregman.

Connie Chen, who tied for 21st at last week’s Allianz Ladies Slovak Open, will also be in the mix, as well as Sunshine Tour regulars Nicole Garcia, Swaziland’s Nobuhle Dlamini and Bonita Bredenhann from Namibia.