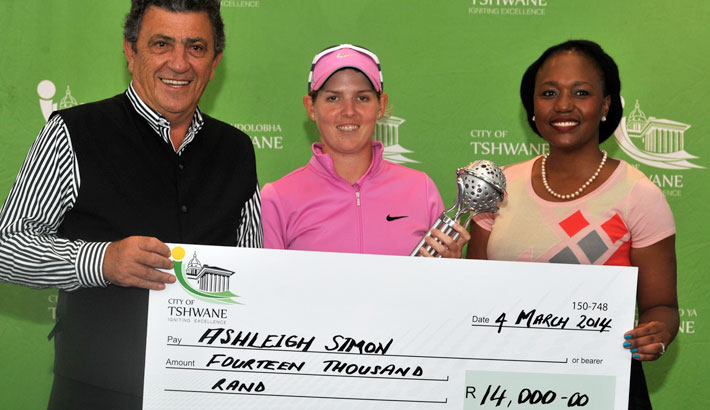 Ashleigh Simon claimed her second successive Sunshine Ladies Tour title with a dominant four-stroke victory at the R100,000 Ladies Tshwane on Tuesday, without having to venture out of the rain-soaked Els Club Copperleaf clubhouse on Tuesday.

The 24-year-old Joburg professional won the Chase to the Investec Cup for Ladies at Glendower on Friday, and rode that confidence to blow away the opposition with a flawless six-under-par 66 and a four shot lead on Norway’s Cecilie Lundgreen, at the Ernie Els-designed layout.

Simon was declared the winner when tournament director Pauli van Meersbergen was forced to call an 18-hole result.

“I am so thankful for the Sunshine Ladies Tour for giving us this opportunity,” said Simon. “I had a poor start in Australia, but I started getting the feel back in George. The great thing about these rounds is that I’ve kept my bogeys to a bare minimum.” Photo: Catherine Kotze/SASPA

“It’s definitely not the way I would have chosen to win, but Mother Nature had her own thoughts on the matter,” said Simon. “I did put myself in a great position in the first round, so I’m really pleased with the result, but it would have been great to get out there again.”

The unrelenting rain in the region that wreaked havoc with the Sunshine Tour’s Tshwane Open on the weekend, also caused play to be called off on Monday, leaving Southern Cape’s Monique Smit to return early on Tuesday.

“The persistent rain rendered the course unplayable on Monday and calling it at 17 holes was the only option,” Van Meersbergen said. “The course took a real beating on Sunday and Monday from the persistent showers and by 10h00 this morning, they had already measured nearly 50mm rainfall.

“We got lucky with a short break for Monique to complete her round, but with the forecast calling for the rain throughout the day and so much water on the course already, we really didn’t have much of a choice in the matter. We had to find a gap in the weather to let Monique finish in order to have a result.”

Simon was thrilled to add the inaugural Ladies Tshwane Open trophy to her mantle, but even more pleased with her performance in the last three events.

“I shot eight under at the Dimension Data Ladies Pro-Am, seven under at Glendower and six under here, and that’s the kind of form I want to take to my first start on the LPGA Tour,” said Simon, who will be teeing it up in the LPGA Founders Cup later this month.

“I am so thankful for the Sunshine Ladies Tour for giving us this opportunity. I had a poor start in Australia, but I started getting the feel back in George. The great thing about these rounds is that I’ve kept my bogeys to a bare minimum. The SuperSport Challenge will be my final event, so I’m hoping for two more solid rounds on Thursday and Friday.”

“We are very proud of the fact that we have extended our support of golf development to the Sunshine Ladies Tour, and we believe that rain is a good omen that signifies a blessing for our inaugural event and promises greater things to come,” Kwele said.

The tropical storm over Tshwane has also caused Van Meersbergen to look at alternative venues for the SuperSport Challenge on 6 and 7 March.

“Unfortunately, Zwartkop Country Club is also flooded and with the forecast for the rain to continue, we are forced to find an alternative venue,” Van Meersbergen said. “We have spoken to several clubs and hope to make an announcement on Wednesday.”