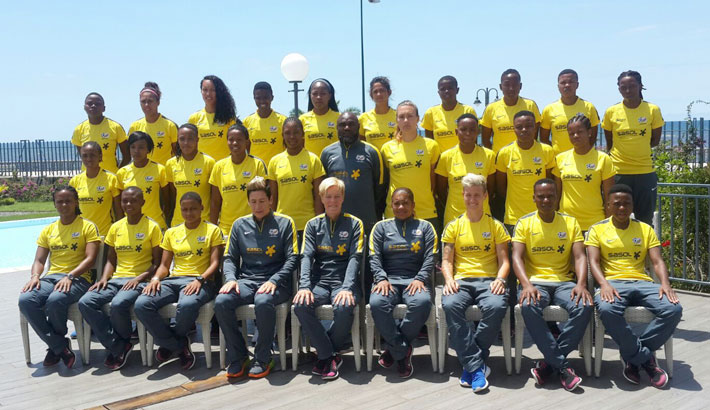 Banyana Return Home with Rio Qualification in the Bag

A goal in the 62nd minute was enough to see the Sasol-sponsored Banyana Banyana through to Brazil.

With the first leg having ended in a goalless draw, the pressure was always going to be on the home side.

The visitors had a chance as early as the sixth minute but Amanda Dlamini fluffed the opportunity.

Ten minutes into the second half Refiloe Jane was faced with just the opposition keeper to beat, but shot straight into her hands.

Then Jermaine Seoposenwe came into picture – She received a beautifully weighted pass from Dlamini, and coolly finished to silence the large crowd at Estadio de Bata.

Six minutes later the hosts could have equalised after a defensive error from Noko Matlou but goalkeeper Roxanne Barker, saved the blushes.

Equatorial Guinea then threw everything at South Africa but the visitors defence stood resolute but not before Nothando Vilakazi had stopped a ball on the line with goalkeeper Barker well beaten.

In the 76th minute Barker came to the rescue again with a great save that kept the home side out as frustrations started to creep in.

And that’s how it ended in Bata – South Africa hanging on for a famous victory against their more favoured hosts.

“We worked as a team and did what we had to. Guinea was tough side but we felt we were better. We build our confidence from the first leg and we had no reason to doubt ourselves,” said goal-scorer Seoposenwe.

“We are not individuals we work as a team – when we lose we lose together and in victory we are also together,” said goal-scorer Seoposenwe. “The win means a lot, as it will hopefully lead to women’s football being recognised in South Africa.

“We just need to build from this as we are growing in our game. We wanted to make South Africa proud and that is what we did. The goal I scored is not about me, but it stems from teamwork,” the talented striker concluded.