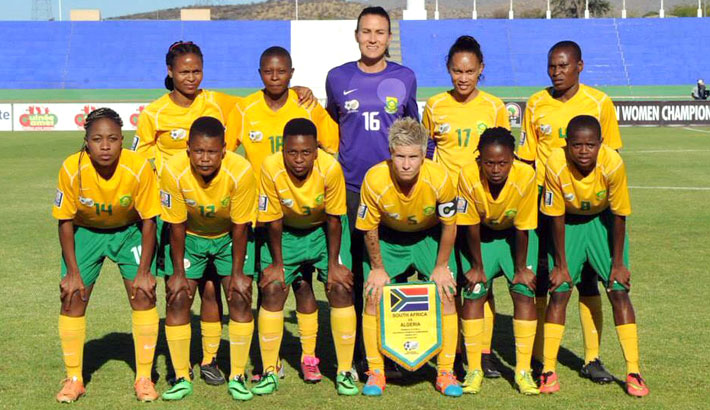 The South African Senior Women’s National Team Banyana Banyana have emerged 1-0 victors over a strong Belgium team for their first victory of the 2015 Cyprus Women’s Cup, at the Paralimni Stadium on Friday, 6 March.

Samford University striker, Jermaine Seoposenwe scored the only goal of the match in the first-half, sealing the much-needed win for Vera Pauw’s charges.

Pauw made two changes to the starting team that played against Mexico on Wednesday, 4 March. USA-based Seoposenwe, coming for Sannah Mollo who was injured in the last match, started upfront with Portia Modise while former U/20 National Team player, Kelso Peskin started at right back ahead of Lebogang Ramalepe.

The South African ladies started the stronger between the two countries, with Seoposenwe’s header hitting the cross bar just three minutes into the match.

The Sasol-sponsored Banyana Banyana got another chance in the 18th minute – after a great build-up, Modise received a pass from Refiloe Jane in the box, but was cleared for a corner before she could shoot into goal.

Seoposenwe then made amends for her earlier chance – after comfortably controlling the ball in the box in the 21st minute, she hit the back of the net. This was her first goal since returning to the National Team under Pauw.

While they were full of running, Belgium did not pose much of a threat for Banyana Banyana as captain Janine van Wyk and her fellow defenders were able to easily deal with their attacking players. The Europeans got a good chance in the 31st minute, but with a solid defence line, Roxanne Barker made a comfortable save in Banyana Banyana goals.

Leandra Smeda came close to registering her name on the score sheet in the 36th minute, but her effort went just inches wide-off the goal post.

The South Africans kept pushing forward in search of another goal, with Modise and Jane coming close to extending the lead just before the break.

Banyana Banyana continued from where they left off in the second half, with Seoposenwe creating havoc upfront for the Belgian defenders.

But it was Amanda Dlamini’s chance in the 73rd minute that nearly went it – and with the keeper well beaten, only the upright denied South Africa their second goal.

In the dying minutes of the match, Belgium came hard at Banyana Banyana and Barker did well to retain her team’s lead when she parried a dangerous-looking shot for a corner. A minute later Lebogang Ramalepe cleared off the line.

During the referee’s optional time, the Belgian ladies threw more bodies forward in search of an equaliser, forcing Barker to make a crucial save to help South Africa hold on to their lead.

It was a much-improved performance from the South African Senior Women’s National Team, and a well-deserved win in a hard-fought encounter.

They next face the Czech Republic in the third group stages match on Monday, 9 March and will take place at the same Paralimni Stadium. Kick-off is at 14h30.

Photo 1 caption: SASOL Banyana Banyana held firm for 70 minutes after taking an early lead against a strong Belgian team to emerge winners of their second fixture of the Cyprus Women’s Cup 2015 on Friday, 6 March. Photo: Banyana Banyana on Facebook.