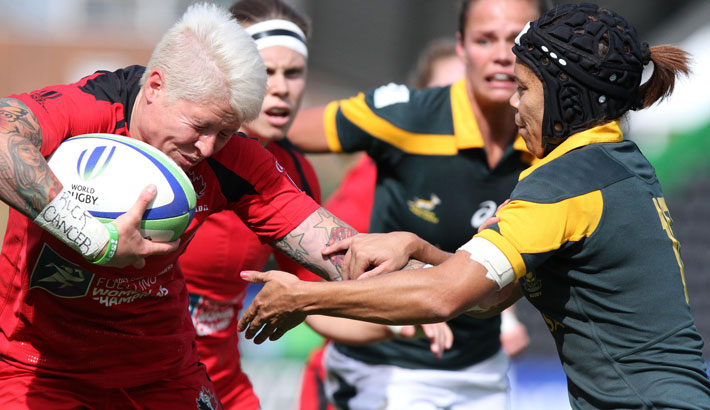 The Springbok Women’s Sevens on Saturday secured a morale-boosting victory against Brazil in their final match of the England Sevens World Series at The Stoop in London, following a defeat against Fiji earlier in the day.

The team battled to contain Fiji in the Bowl Semifinal and suffered a disappointing 38-5 defeat, but they bounced back strongly to shut out the 2016 Olympic hosts for a 14-7 victory to finish the tournament on an encouraging note.

The win is expected to boost their confidence significantly for the season-ending Amsterdam Sevens next weekend.

The Springbok Women’s Sevens struggled in their clash against Fiji as the Islanders used their powerful upper-body strength and speed to force their way onto the front foot. This earned them two first-half tries.

South Africa, meanwhile, created a fantastic opportunity to score with captain Zenay Jordaan crossing the tryline after stepping her way through the defence, but the try was denied as she failed to place the ball after being tackled.

Fiji, however, ran riot in the second half as they scored three more tries after the break. But the Bok Women’s Sevens bounced back with a try by Zaandre Theron, who gathered a fantastic pass from Jacqueline Kriel. Fiji, however, had the last say as they ran in their sixth try on the stroke of full-time to secure a 38-5 victory.

Theron scored her second try of the day from a quick tap to open up the scoring in the 11th /12th place-playoff against Brazil after Veroeshka Grain powered her way through three tackles.

Grain backed this up with a second try minutes later after finding space and using her raw pace to cruise to the tryline to hand SA a 14-0 lead. Brazil, however, bounced back with a try from a dummy pass to reduce the gap to 14-7 at the break.

The second half was tense as Brazil tried hard to breach South Africa’s defence, but the Springbok Women Sevens held their nerve and shut them out to win the match.

Springbok Women’s Sevens Results at the England Sevens World Series, played at The Stoop in London, 15-16 May, 2015:

Photo 1 caption: The Bok sevens squad did SA proud with a morale-boosting win over 2016 Olympic hosts, Brazil, to end their London Women’s Sevens Series campaign. In this photo, Marithy Pienaar looks on as Canada’s Jen Kish sidesteps Mathrin Simmers’ tackle, during their second fixture of the tournament’s penultimate stop at Twickenham in London, on 15 May, 2015. Photo: Martin Seras Lima / World Rugby