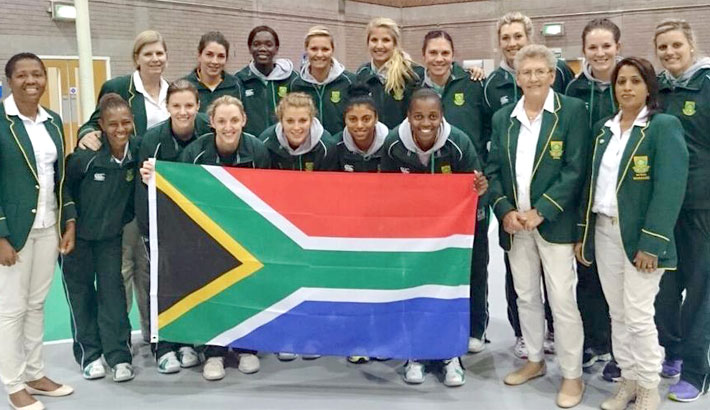 Going into their final game of the European Netball Championships on Sunday the SPAR Proteas, knew they would have to pull out all the stops.

South Africa’s opponents on the last day of the four day Championships being played in Belfast, Northern Ireland, were the aggressive Trinidad and Tobago – a side ranked only three spots behind the sixth-ranked Proteas at number nine on the world rankings.

The “Calypso Girls” – as the Caribbean islanders are fondly referred to – are renowned to play hard and physical netball, and the Proteas were aware that the challenge was on, but the Proteas were confident going into Sunday’s game, having easily beaten Wales 72-42 late on Saturday evening.

Maryka Holtzhausen, the SPAR Protea Captain said “after a great performance against Wales my team were confident that keeping the consistency through 60 minutes Saturday against Trinidad & Tobago and sticking to our game plan would be the key focus.” Holtzhausen added that South Africa expected a tough physical battle from “The Calypso Girls” but were definitely up for the challenge.

And what a challenge it was. After the Proteas lost the first (8-10) and second quarters, they went, after half time, into the third quarter 6 goals behind their opponents (18-24).

South Africa clawed back to a three goal deficit trailing 32-35 going into the final quarter.

The Proteas came from behind to take a 4 goal lead (42-38) with only six minutes left of play. South Africa in the final minutes made the crucial goals at the right time to beat Trinidad and Tobago 46-42.

Coach Bennie Saayman admitted that South Africa for the first three quarters could not find rhythm. “ Unforced errors and missed shots kept Trinidad and Tobago in the lead. Real character and supportive play brought about the much needed breakthrough in the fourth quarter.”

“South Africa showed their will to win when their kept Trinidad and Tobago under constant pressure by employing outstanding defending tactics. They forced Trinidad and Tobago to commit errors, took the turn overs and with fast and disciplined attack scored. The team showed character by fighting for this win” continued Saayman.

So South Africa ended second in the Championships behind favourites England. With the championships being a world ranking tournament it was an important finish for the SPAR Proteas and good preparation for the Netball World Cup to be staged in Sydney in August.

Captain Maryka Holtzhausen said she was extremely proud of the girls and what they accomplished in Northern Ireland. “ That was a great match against Trinidad and Tobago. The islanders came out very physical and we started a bit slow, but great character from the girls to keep on working and pull it through even though we were behind. There was great impact from players coming off the bench.”

Holtzhausen thanked South Africa for all the support which her team appreciated. “We now know what we need to work on harder in the lead up to the World Cup in Sydney later this year.”

Photo 1 caption: A proud SPAR Proteas netball squad savour the moment after winning four of five fixtures to beat expectations and emerge silver-medalists at the conclusion of the 2015 European Netball Open Championships, in Belfast, Northern Ireland, on 17 May. Photo: SPAR Proteas on Twitter