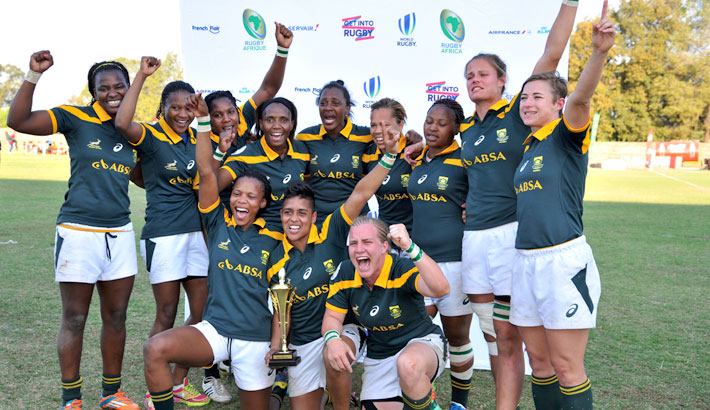 The Springbok Women’s Sevens proved their continental superiority in emphatic style, defeating Kenya 31-5 in the Cup Final of the Rugby Africa Women’s Sevens Olympic Qualifier, at the Barnard Stadium in Kempton Park on Sunday, 27 September, 2015.

The victory ensured that the team completed the tournament unbeaten and on a memorable note, as they scored 265 points and conceded only five in their six matches, and kept alive their hopes of representing South Africa at the 2016 Rio Olympic Games*.

The Springbok Women’s Sevens were fired up in their opening match of the day against Uganda with speedster Phumeza Gadu touching down minutes into the match to get the scoreboard ticking.

Veroeshka Grain and captain Zenay Jordaan scored soon after to push the team 17-0 ahead. Gadu found space out wide and used her raw pace to run in her second try on the stroke of halftime for a 24-0 lead.

Gadu scored her hat-trick in the opening seconds of the second half after breaking through a tackle on the halfway line and sprinting to the tryline to stretch their lead to 29-0.

The Springbok Women’s Sevens continued to make their presence felt in the dying minutes as Grain received the ball out wide and touched down two more times to secure her hat-trick and a 39-0 victory.

This result earned the team their place in the Cup Semi-final against Tunisia.

Grain opened up the scoring from the kick-off in the Cup Semi-final as she received the ball and danced her way through the defence to touch down under the poles. Marithy Pienaar backed this up with a try of her own a minute later to build up a 12-0 lead.

Gadu then found space on the outside and cruised in for the team’s third try.

Nosiphiwo Goda had the final say in the half as she dashed to the tryline after her team-mates drew the defence to hand the team a 24-0 lead at the break.

Pienaar struck again for the Bok Women’s Sevens in the second half as she scooped up a loose ball from a ruck and ran in a long-range try. Tunisia tried hard to force their way back into the match, but the Springbok Women’s Sevens defended like demons to shut them out.

A penalty on the stroke of fulltime for the home team allowed Rachelle Geldenhuys to score once more before the final whistle to secure an impressive 34-0 victory and a final berth.

Kenya, however, made their presence felt early on in the final as they scored first after stepping their way through the Springbok Women’s Sevens defence for a 5-0 lead. This marked the first points scored against the home team in the competition.

Gadu, however, levelled the scores as she spotted space on the outside to score for the hosts.

Jordaan struck again soon after as they applied pressure on Kenya and strung together phases to build a 10-5 lead. Jordaan added another try on the stroke of halftime as she took a quick tap from a penalty and caught the defence off-guard to push the team into an encouraging 17-5 lead at the break.

Gadu wasted no time making her way to the tryline again in the second half as she navigated her way through the defence and used her pace to touch down under the posts for a 24-5 lead. An intercept by Goda soon after allowed her to stretch the score to 31-5.

This proved to be the last points for the team as Kenya tried hard to get their hands on the ball. But their efforts were too little too late, as South Africa secured the 31-5 victory.

* The decision on whether the team will go to the Olympic Games will be made by the South African Sports Confederation and Olympic Committee.