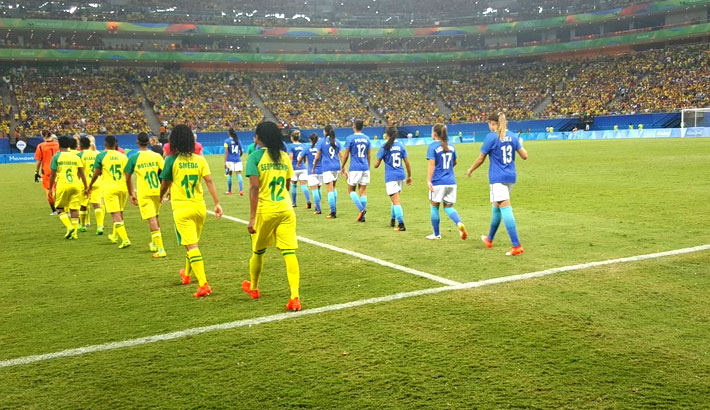 The South African Women’s Olympic Team put up a brave fight in their final match of the 2016 Rio Olympic Games, holding hosts Brazil to a goalless draw.

The clash took place on Tuesday, 9 August 2016 (Wednesday, 10 August in SA) at a sold-out Amazonia Arena in Manaus.

Banyana Banyana suffered two losses and a draw in Group E, thereby failing to proceed to the quarterfinals. Brazil had already booked their place in the following impressive wins against China and Sweden – all three are in the last eight.

South Africa’s head coach Vera Pauw, made only one change to the team that lost 2-0 to China, giving Leandra Smeda a run in the place of Lebogang Ramalepe. Brazil on the other hand made six changes to their team – which included their star player Marta, who had to come off the bench in the second half.

From the first whistle, the home side pushed South Africa all the way but the defence, led by captain Janine van Wyk, held very firm as the had to be alert at all times. In cases where the defence was broken open, goalkeeper Roxanne Barker pulled off some great save to keep her side in the match.

While it was a team effort from South Africa, at times it looked like it was Brazil vs Barker, as she made save after save.

Both sides exchanged fire but could not find the back the of the net – Thembi Kgatlana for South Africa, whose shot was blocked by Aline in the Brazilian goal.

Barker made a brilliant save in the 24th minutes when she tipped over a goal bound shot.

Debhina then hit the upright when Barker misjudged a long-range shot, thinking it was going out.

With the score at half time goalless, this gave the South Africa defence more energy, and they upped their work rate as Brazil increased their attack.

Barker nearly gifted the Brazilians a goal when the ball slipped under her body, but midfielder Refiloe Jane cleared the danger.

With a lot of tired bodies on the field, which was also partly to the high temperatures and the humidity, Pauw introduced fresh legs when she brought on Sanah Mollo and Amanda Dlamini for Linda Motlhalo and Thembi Kgatlana respectively.

However much Brazil tried, it ended goalless, earning Banyana Banyana their first point of the competition. Critics will note that they exit the Olympics without scoring a goal in three matches, despite creating numerous chances.

At the same time, the South Africans are also the only team in Group E who did not concede against Brazil, who scored eight past China and Sweden.

South Africa put up a good performance throughout the tournament but failure in front of goals harmed any chance they had of progressing to the quarterfinals.

In the other Group E clash, which was played simultaneously, Sweden and China finished without goals scored. Both nations finished on four points – enough to ensure qualification into the next round where they join Brazil while South Africa heads home.

Photo 1 caption: Banyana Banyana and Brazil walk out at the start of their final Group E match in front of a full house at the Amazonia Arena in Manaus. Already eliminated from progress prior to the fixture, the South Africans played their hearts out and restored dignity with a clean score-sheet against Group leaders and Rio 2016 hosts, Brazil. Photo: Banyana Banyana

Photo 2 caption: Thembi Kgatlana in South Africa’s best first-half chance against Brazil on Tuesday after a brilliant pass set her up with a slim chance at scoring, before the tall keeper Aline came into play keep the scores level. Image: Screengrab of Supersport’s broadcast of the match

Photo 4 caption: In full support of their women’s football team, fans in Brazil’s characteristic yellow ensured a sold-out match – and probably rates as one of the biggest crowds Banyana Banyana has played in front of.  Image: Screengrab of Supersport’s broadcast of the match