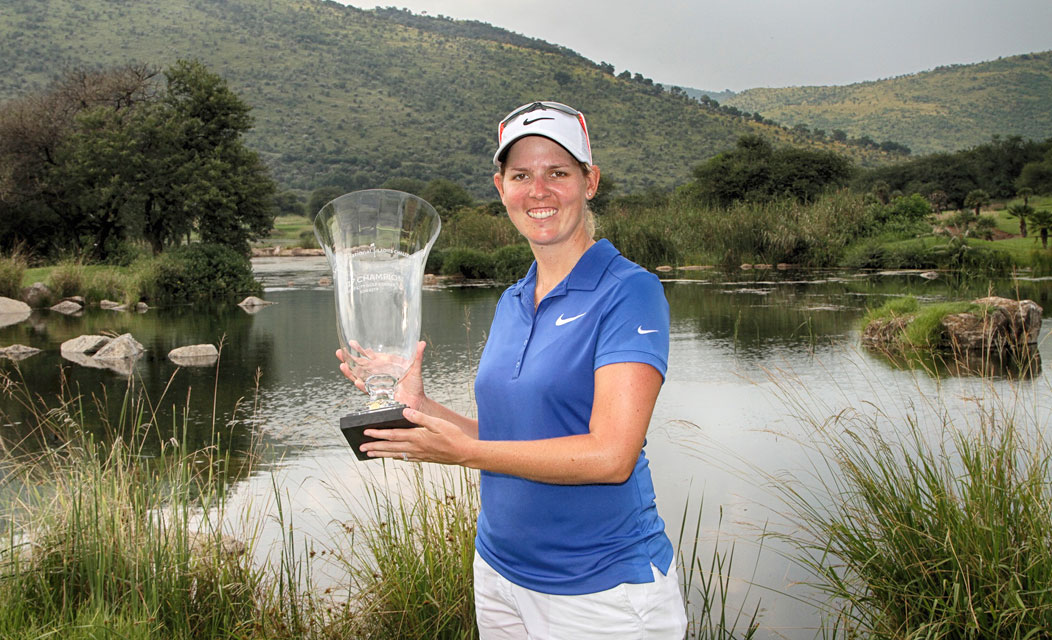 Ashleigh Buhai sealed her sixth Sunshine Ladies Tour title – and second this season – with a great par-save at the 54th hole of the Sun International Ladies Challenge at Sun City on Thursday.

The Edenvale golfer chipped out of the sticky rough to the back of the green at the last hole of the Lost City Golf Course with a two shot lead in hand. She lagged the first putt to three feet and boxed the second a four-under-par 68 and a winning score of 10 under 206.

The victory came with a cheque worth R28 000, which propelled Buhia to second in the Chase to the Investec Cup for Ladies. She is less than 300 points behind current leader Kiran Matharu with just one counting event left for the 2017 season.

On Sunday, Buhai will start her bid for a hat-trick of wins in the R500 000 Ladies Joburg Open at Royal Johannesburg and Kensington having accomplished what she set out to achieve at the Gary Player-designed layout this week.

“Winning here was a huge goal and I’ll thrilled to bits that I made it happen,” Buhai said. “I missed two events when I competed in the Australian Women’s Open on the LPGA Tour, and I had to win this week to get close to the top in the points standings.

“Now I am exactly where I wanted to be. I have a shot at the Chase to the Investec Cup for Ladies this year, and I just need to take this moment to my home course next week and do what I did in the Sunshine Ladies Tour Classic two years ago.”

Buhai began the last round two strokes behind Bonita Bredenhann from Namibia and one shot shy of Lejan Lewthwaite.

“They are both young pros and playing in the leading group was unfamiliar territory for both of them,” Buhai said. “They both handled the pressure really well over the first nine holes. I knew if I could get to one under on the front nine I had a chance, and the birdie at seven got me closer.

“I hit a good drive and it was the perfect wedge distance. It pitch a foot from the hole I made the putt. That birdie and the one at the ninth was the kicker I needed to take into the back nine.

“I made a great birdie from the rough at 11 and had a lot of chances down the back nine, which is all you can ask for. I made good putts; some didn’t drop but I made the ones I needed to. I played really well this week, but I made a few silly bogeys.  I told myself I needed a flawless round to win, and I’m really pleased that I pulled it through.”

Former champion Tandi von Ruben shot 71 to tie for third with Lewthwaite, who signed for 73 and Bredenhann finished in fourth on her own after closing with a 75.

The big-hitting Namibian gave four shots away at 12 and 14 and had pair of bogeys at 15 and 17, while Lewthwaite countered a brace of bogeys at six and seven with a lone birdie 17.

Buhai was impressed by both players and believes they will gain a lot from the experience. “Bonita played incredibly well up until the 12th and Lejan is a real fighter.

“I had the experience on the, today, but they are both so talented that it won’t take them long; a bit more experience and they will both get to the winner’s circle.”

Photo 3 caption: “Great to be in the winners circle again and have my dad here to witness it!” said Buhai on Twitter, acknowledging her sponsors Nike Golf and Srixon Golf. Photo: Ashleigh Buhai

Photo 4 caption: Tandi von Ruben finished the best of the most recent title winners, carding a 220 for her three rounds and finishing in third, four shots off the pace. Image: Sun International

Photo 5 caption: The question that was hanging large ahead of the final round and was emphatically answered by SA no. 1 Ashleigh Buhai. Image: Sun International