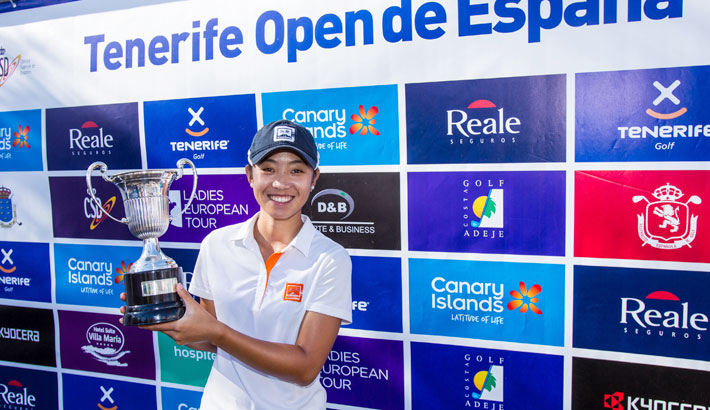 South Africa’s Connie Chen opened the door to a new chapter in her short career when she closed out the Tenerife Open de España Femenino with a maiden pro victory on Sunday.

The 21-year-old Gauteng professional resisted any attempt from the chasing pack to cruise to a two stroke victory at Golf Costa Adeje in the Canary Islands.

The Spanish darling also closed with a 69 to take second, while American Beth Allen returned a 67 to take sole third on 279.

“I’m so happy,” gushed a delighted Chen. “I was so nervous, but I’m thrilled that I kept going. The eagle on the back nine gave me a really good feeling about the day.”

The former top South African amateur missed seven cuts in 11 starts, but gave a glimpse of her emerging form with a season-best tie for seventh at the Sberbank Golf Masters at the end of July.

Chen moved into striking distance at the Spanish Open with rounds of 68 and 70 and claimed a share of pole with Amy Boulden from Wales with a third round 69.

She began the final round with four pars and a birdie at the fifth, and recovered quickly from a bogey at the seventh with a birdie at the eighth to take the outright lead.

Chen pulled two strokes clear with birdie at the 11th and boxed a 30-foot eagle putt at the par-five 13th to stretch her lead to four strokes.

Chen was three strokes clear of Ciganda when she reached the 18th, but followed a superb drive and approach to the edge of the green with a nervy chip that led to a bogey at the par five.

“I was very nervous over that chip, so I just acknowledged that it is natural to be nervous,” she admitted. “I tried to focus on the scenery and the blue skies to distract me.”

As usual, Chen had her father, Hong, on the bag. The pair had a heart-to-heart before the start of the event and agreed to change gears.

The reward was a handsome €52,500 bump in earnings, a jump to 23rd in the rankings and sizzling form ahead of the Cell C South African Women’s Open in three weeks.

“My dad and I decided to take a more relaxed approach this week,” said Chen. “It’s nice that we worked so well together this week, because was a little different to our usual disagreements on the course.

“We are very close, and we discussed the things that work and don’t. He wants me to do well, and we decided we need to get a little bit of distance in the relationship and chill out.

“My dad was able to let go and let me play my own game this week.”

The two Sunshine Ladies Tour winners will also line up in the WPGA’s flagship event at San Lameer Country Club from 16-18 October.

(With thanks to the Ladies European Tour for the Chen quotations)