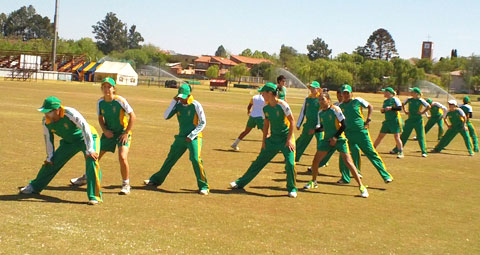 While most of the world of cricket in South Africa is enjoying a brief rest before the new season commences, it has been business as usual for Proteas’ Women’s squad. The team are gathered at the High Performance Centre (HPC) in Pretoria for the final women’s camp before the final training squad for the ICC Women’s World T20 is announced on Sunday.

Coach, Yashin Ebrahim-Hassen is happy with the progress made by his team. “It’s been a long, exhaustive road and I am satisfied with the improvement of this side. These are some of the most hard-working women I’ve ever encountered, and they are very goal-orientated.

“The positive mindset they have adopted makes me excited for things to come. I won’t compare them to other women’s sides because we don’t know what they are doing from a preparation point of view, but I must say that we have come a very long way in a short space of time and I’m a happy coach,” he said.

A great emphasis will be put into fitness during this camp. Team fitness trainer Megan Dutton is happy with the progress of the team.

“I’ve seen a massive improvement fitness-wise in the team, the ladies are committed to their targets and are really pushing themselves, there’s always room for improvement of course but right now, they are headed in the right direction.

“They have shown great commitment to themselves and the team by maintaining and in some cases, surpassing their fitness targets and that bodes well for the upcoming T20 tournament,” Dutton commented.

Team bio-kinestist, Charlie Guoveia provided players with tailor made fitness programmes to up their strength and agility. Guoveia said: “I’m very happy with the work that the team have done to improve their strength and agility, each player is given a programme that is unique to them and it pushes them to compete against themselves and to work at improving for their own sake.

“This is a very committed group and each player knows a place in the World Cup squad is at stake, this is why I see a greater effort than ever before from all of them,” said Guoveia.

Captain, Mignon du Preez is always happy to get together with her team and to spend time with them. “We always have fun when we have our camps, it’s always a tough and taxing few days that leaves us even hungrier to make the final World Cup squad. I feel our preparation is right on track and we are looking forward to the World T20 and showing the world what we’re made of,” she said.

The camp ends on Sunday after the final 18-women training squad for the World Cup is announced. This squad will go on to more intensive training until the final 15-women squad will be announced in August.