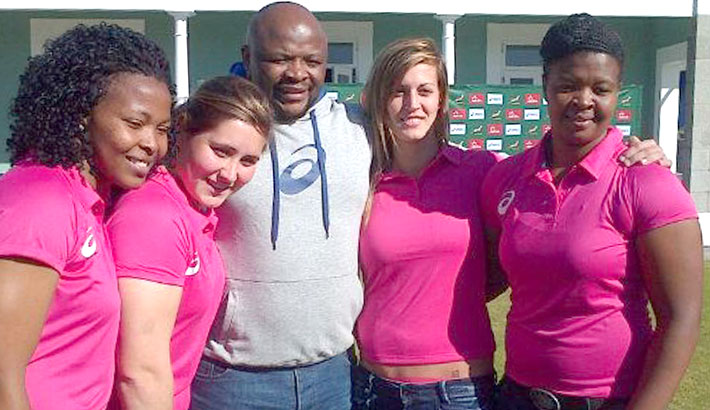 Springbok Women’s coach Lawrence Sephaka on Tuesday named 11 players with World Cup experience in his 26-member squad for the IRB Women’s Rugby World Cup in France from 1 to 17 August. The team’s participation in the tournament has been made possible by a R2,3m grant from the National Lotto Distribution Trust Fund.

The squad will be led by experienced captain and No 8 Mandisa Williams, who guided the team in the 2010 showpiece in the UK as well as the 2013 IRB Women’s Rugby World Cup Sevens in Moscow.

Four of the eleven players with World Cup experience featured in both the 2006 and 2010 Women’s Rugby World Cup tournaments in Canada and England respectively. They are Williams, flank Lamla Momoti, prop Cebisa Kula and scrumhalf Fundiswa Plaatjie.

Another two players in the squad, wing Veroeshka Grain and centre Benele Makwezela, boast Rugby World Cup Sevens experience, as they were members of the squad that travelled to Russia last year.

This group of players will form the core of the squad, as their experience will be vital given the challenging pool South Africa have been drawn in with Australia, World Cup hosts France, and Wales.

“These players have worked very hard and have made many sacrifices in the last few months to work their way into contention for places in the World Cup squad, and their selection is just reward for those efforts,” said Sephaka.

“Our main selection criteria were consistency in performances this season, and to select players with the best skills and technique, and I believe we achieved that with this group of players.

“That said, there is hard work ahead in the next six weeks to ensure that we are at our best when we take to the field in our opening match against Australia on 1 August. Although I am pleased with our preparation in the last few months, we need to step it up to a higher level now, and our warm-up tour to London and France in the next few weeks, will allow us to do this.”

SARU CEO Jurie Roux congratulated the players on their selection and encouraged them to give their best at the international spectacle.

“It is a huge honour to represent one’s country, and to do so at a World Cup is a privilege only a select few are afforded, so congratulations to the players,” said Roux.

“The team certainly faces a tough task given the challenging pool they have been drawn in, but we will be behind them all the way with the rest of the country. With women’s rugby being only 10 years old in South Africa, we are aware that we cannot expect miracles. However, we would like to see the team improve on their past performances. I wish the team well in their World Cup campaign.”

The Springbok Women finished in 10th place in the 2010 World Cup, with their only victory in the pool stages being against Wales.

All of the players with the exception of centre Ziyanda Tywaleni, centre Marithy Pienaar and scrumhalf Siphosethu Tshingana will assemble in Pretoria on Wednesday for a training camp in Pretoria followed by the warm-up tour to London and France from 25 June to 5 July.

The World Cup squad will gather again in Cape Town on 14 July for their World Cup holding camp, and are set to depart for France on 27 July for the tournament.

Photo 2 caption: The Women’s World Cup squad will tour England and France during a warm-up tour from 25 June to 5 July, and will gather again in Cape Town on 14 July for their World Cup holding camp, ahead of their departure for France on 27 July for the tournament, where they will face hosts England, defending champs Australia and Wales in the tournament’s tough Pool C. Photo: SARU