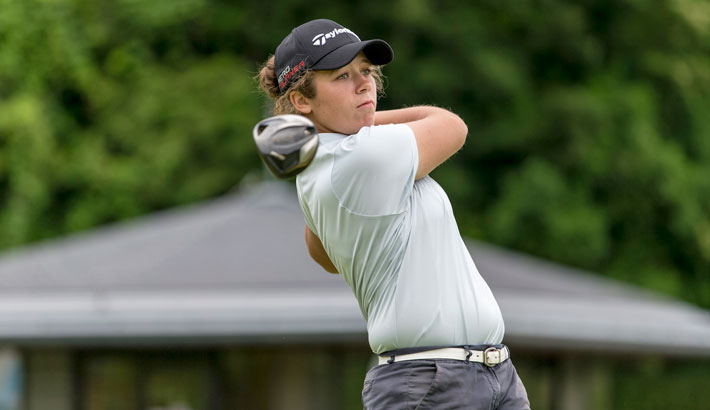 Gauteng North junior Danielle du Toit gave credence to the old adage “when at first you don’t succeed, try and try again” when she seized a runaway victory in the Nomads SA Girls Championship at Orkney Golf Club on Tuesday.

In 2014, Ivanna Samu lost the prestigious title in a three-way play-off to Cara Gorlei.

A year later, Samu returned and defeated Du Toit at the third extra hole to claim a play-off victory. Du Toit continued the runner-up to champion trend at this year’s championship with an impressive nine stroke victory over Samu.

“I am thrilled to bits over this win and the way that I won,” gushed the delighted Du Toit. “I gained a lot of experience playing in the Junior Golf World Cup in Japan and I felt a lot more confident coming to Orkney this year.

“I was determined to make a good start and to build from there and I am really proud that I achieved what I set out to do. I’m really thankful to everyone that supported me, especially my parents, my coach and the Gauteng North Golf Union and I’m so proud to justify their backing.”

The 17-year-old laid a solid foundation for her title bid with a blistering five-under-par 67 in the opening round. Having established a six shot lead, the Pretoria Country Club golfer she stayed well clear of the chasing pack led by Samu with a second round 72.

Five shots clear at the start of the final day, Du Toit produced a composed front nine with eight pars and a birdie at the par four fifth to turn six under.

She pulled 10 shots clear of Samu through 12, despite bogeys at 10 and 11, after the defending champion’s charge did not materialise.

Du Toit reversed the some of the damage with a birdie at 12 and notched back-to-back gains at 14 and 15 to eliminate another bogey at 13. She finished par-bogey-par to close with a 72 for a winning total of five under 211.

Samu began the final round at two over after successive 73s. The Ruimsig golfer offset bogeys at two, six, seven and 10 with gains at five and 12, but a double bogey at the par four 13th saw her slip 12 shots off the pace. Samu rallied with back-to-back birdies at the closing holes, though, to sign for a 76 and sole second on four over 220.

Chiara Contomathios from Wanderers Golf Club eagled the par five 17th to get to six under and finished on her own in third on six over. Fellow Gauteng junior Woo Ju Son from Country Club Johannesburg took fourth at seven over after closing with a 79 and Lindi Coetzee from Gauteng North rounded out the top five at 11 over.