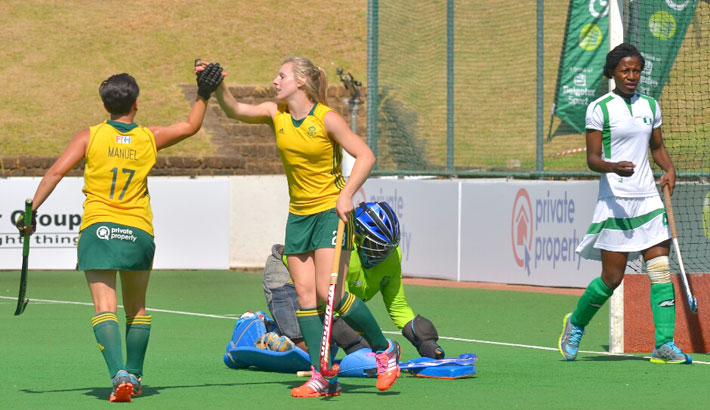 With the prize of qualification for the Rio 2016 Olympic Games on offer, the SA women’s hockey team beat Nigeria 15-0 to take a massive goal difference lead on the tournament log, on Day Two of the Greenfields Africa Hockey Championship at the Randburg Astro on Saturday.

The team has been working hard at Randburg for the past few weeks ahead of the continent’s premier competition which started in Johannesburg on Friday, and their preparation efforts saw the host side finish Day 2 of the tournament in third place after their opening game, behind Kenya and Ghana who have secured wins in both their opening fixtures.

Great win for @sawomenshockey in their opening match of the #GAHC2015 now for @Springboks to do the same! #win #RSA #HomeGroundAdvantage

Being played alongside the men’s tournament in Randburg, the women’s tournament will play in a round-robin format, and the team boasting the most points by the end of the round-robin will win the right to be the African continent’s representative at the Rio Olympics.

South Africa is expected to end the tournament with a convincing win, and played to script with a cohesive performance to win their opening encounter after leading 7-0 at half-time.

Bernie Coston added another field goal for two goals in the match after opening the scoreboard assault from a field goal in the sixth minute, but it was Lilian du Plessis who was the star of the SA team on the day, sinking five in total.

Also on the score-board for the hosts were Jade Mayne (who scored a total of three field goals), Toni Marks (2), Lisa Deetlefs, Candice Manuel and Tanya Britz.

The SA team is without the services of the the ever-dependable Kelly Madsen – unavailable after incurring a knee ligament injury, and the fiery Sulette Damons, who has also suffered from an ACL ligament tear that will see the striker out of action until the New Year.”

The SA women have a rest day on Sunday before tackling Namibia at 7pm Monday, before meeting Zimbabwe at 4.45pm Tuesday.

South African Women’s Hockey Fixtures and Results at the Greenfields African Hockey Championships, to be played at the Randburg Hockey Stadium:

South Africa Squad for the Africa Olympic Qualifier Tournament at the Randburg Hockey Stadium, from 23 October to 1 November: