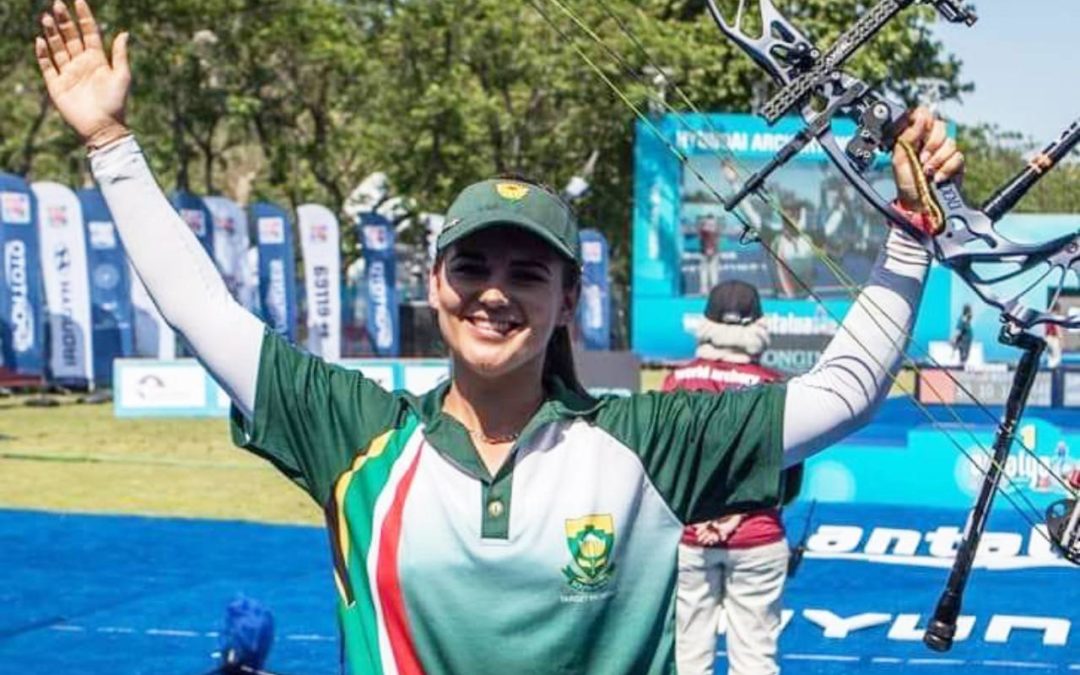 Compound archer Danelle Wentzel once said that archery is a mind game and the one who can handle the pressure the best is the one who is going to win.

It is that attitude that saw Wentzel win a gold medal during the Archery World Cup in Antalya last year.to give South Africa its first individual title in the history of the circuit.

Wentzel’s gold medal effort in Antalya saw her become the first woman from South Africa to compete at the 2019 Hyundai Archery World Cup Finals in Moscow.

It was a full circle moment for this talented sportswoman, who got interest in archery when her family introduced her to the game. It took her father a year to convince her to compete in her first competition and since then she has not looked back.

Wentzel made her debut in 2009 and two years later, the lefthanded archer took to the international stage to broaden her horizons. She has also competed at the 2014 Nimes World Championships, 2016 Marrakesh and Bangkok World Cups.

Speaking to Celine Abrahams, Wentzel chats about being afforded the opportunity to travel internationally playing a sport that she loves and the challenges that she faces being a woman in the game.

Danelle, how has your life changed during COVID-19 lockdown?

It slowed down dramatically. It gave me the realisation that life is short, and you should appreciate every second with family and friends.

How are you training?

I’m training in my backyard. I can shoot comfortably at 20m which is enough to focus on my technique and then I’ll do a home workout routine to get my heart rate up and get off the couch, ha-ha.

For many this time has put strain on them mentally, how are you keeping yourself motivated?

I’m keeping myself motivated by keeping busy and doing things I don’t normally get time to do. I’m reading a lot which helps keep me distracted and then I try not to read all the negative news on social media and remind myself this too shall pass then we can go back and rebuild.

What has been the biggest challenge for you during this period?

Biggest challenge is to keep practising even though I don’t know when we will be able to compete again; setting a goal is difficult. Not being able to see friends and family is harder than I expected. Just not being allowed outside even for walks is hard.

Archery is such a different form of sport; how did it all start for you?

I got introduced to archery when my cousin bought a bow followed by my brother and father and I felt like I wanted to join in the family activity. At first I only shot at home with them, my dad bribed me to shoot my first competition, it took him a year to convince me and to this day I’m grateful he pushed me to do it.

What is it about archery that excites you?

Archery excites me every time the whistle blows and I step on the line. It’s exciting when you’re having a good day and the adrenaline starts going through your body and you keep in your zone totally focused. It’s exciting to see everyone you got to know so well and they share in your success as much as you wish it for them, it’s a sport where it’s so individual and on any day someone can beat you and that just makes you work harder for the next time you have a good day.

Being in the sport has afforded you to travel internationally. Did you ever dream that one day you would be given the opportunity to be in this position?

I always liked the idea of International travel but I never thought that I would have been to the places I have. It’s a blessing and it introduced me to different cultures and I love to learn about them it also showed me how small one is in such a big world. Without archery it wouldn’t have been possible.

What do you think of the state of women’s sport?

Everyone has a different opinion and a different experience, I’ll voice mine. I think that over the years women have come extremely far in sport, being able to compete, recognised, to do it as a living, etc. I also think there is still a lot of progress that can be made and it cannot be made without women supporting women. By support I mean attending their respective sporting events, watching it on your television and buying their merchandise.

I think by not just voicing your protests that women should be equal to men, to start supporting women sport in the same way men support their teams. We will see the number of participants and supporters increase and that way by actually being active can level the playing field and make it fair to expect equal grants.

What challenges have you faced as a female in the sporting industry?

The biggest challenge for me was more in my mind than anything else. I saw my sport as a male dominant sport and me being an archer I had the fear of being called “butch” even though it still is more male dominant I’ve learned that there is place for anyone. It is such a diverse sport, and everyone is welcoming. I now enjoy shooting with the men just as much as I do with the women. It was my own beliefs that I had to change and I’m glad I didn’t let that stop me from doing what I’m passionate about.

What was it like winning a gold medal in Antalya which saw you qualify for the 2019 Hyundai Archery World Cup Finals in Moscow?

The very first time I shot in Antalya I fell in love with the finals venue and always said that I want to shoot the finals on the beach. Last year that dream became a reality and I saw myself in the gold medal match. Getting there wasn’t easy, but my hard work paid off and I was totally focused.

I had a lot of help to be 100 percent prepared and Patrick Roux (South African compound archer) was one of them being there when I practiced and pushing me with challenges. It felt amazing and the memory of it keeps me motivated to practice.

How was the experience being the first South African woman to compete at the Finals?

I still don’t have the exact words to sum up the experience. Getting there came as a shock and I had to fight the battle of “am I good enough” to which I’ll now respond to as, I am and so is anyone else. I learned a lot and it was amazing because I got to experience it with my father.

How different is the state of women’s sport on an international stage as compared to South Africa?

The state of women’s sport internationally differs quite a bit from South Africa. There are more women competing. With the increased numbers they are also motivated to work harder to experience success and they have more opportunities to get used to being in pressure situations as opposed to us in SA.

They also have a lot of local tournaments where they register everyone in the same category so they compete against the men as well and that increases their effort to be perfect and in turn they again learn how to deal with pressure even more so when they do shoot in their own category they are mentally prepared and have a higher confidence level.

What are you hoping to achieve in the future?

I would like to continue traveling around the world and compete wherever I am. To keep pushing myself to become better and not let my own insecurities stop me from achieving my goals.

Photo 1 Caption: Compound archer Danelle Wentzel became the first woman from South Africa to compete at the 2019 Hyundai Archery World Cup Finals in Moscow. Photo: Supplied
Photo 2 Caption: Wentzel’s career in archery began when her family introduced her to the game. However, it took her father a year to convince her to compete in her first competition and since then she has not looked back. Photo: Supplied
Photo 3 Caption: She made her debut in 2009 and two years later, the lefthanded archer took to the international stage to broaden her horizons and has competed at the 2014 Nimes World Championships, 2016 Marrakesh and Bangkok World Cups as well as the 2019 Antalya World Cup. Photo: Supplied