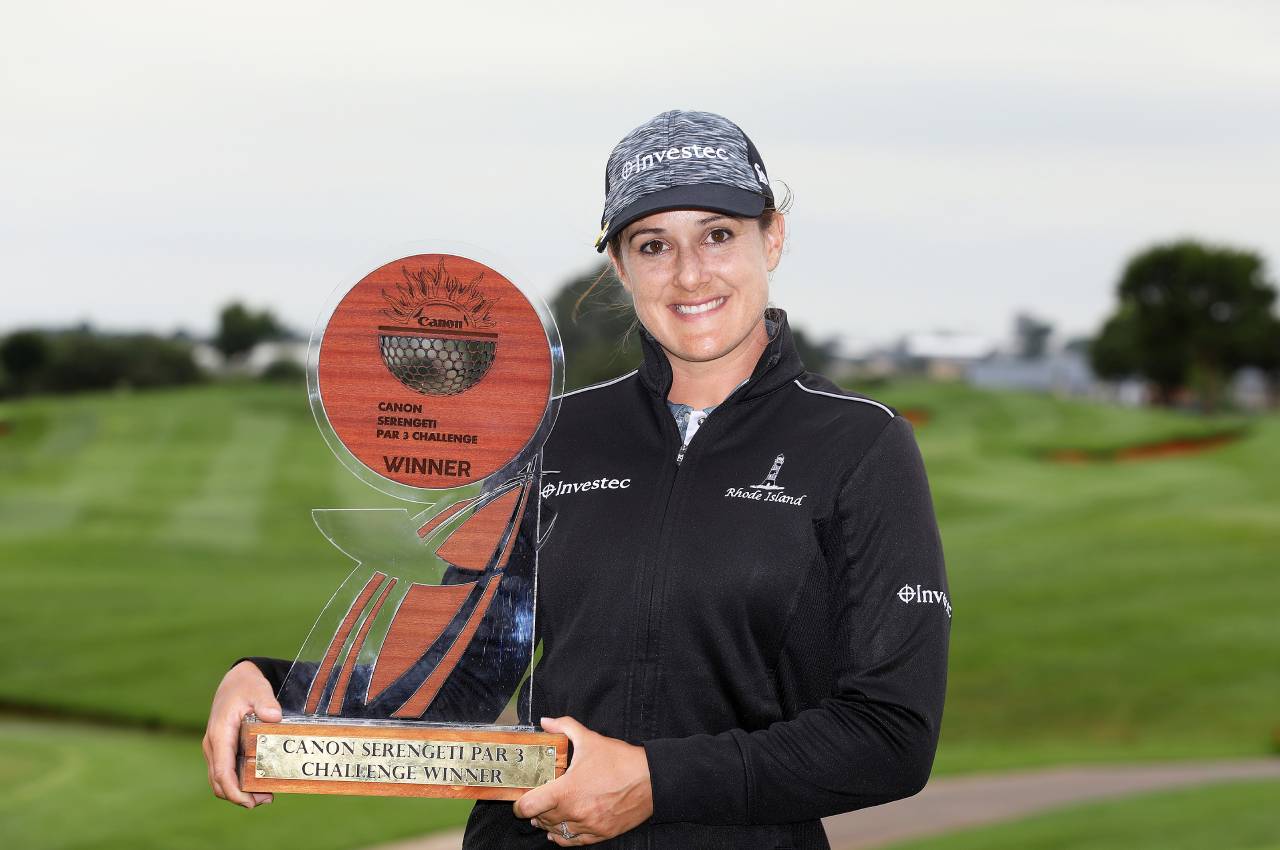 Nicole Garcia celebrated a much-anticipated return to the winner’s circle with not one, but two dramatic victories at Serengeti Estate on Sunday, 23 February 2020.

Garcia opened her campaign on the 2,618-metre par three championship layout with a level-par 54 and began the final round one stroke clear of Brittney-Fay Berger. In-form Lejan Lewthwaite – already a two-time winner this season – was two shots back in joint third with five-time Sunshine Ladies Tour winner Stacy Bregman.

Garcia gave the chasing pack a glimmer of hope when she paid for an errant tee shot on the third hole with a double bogey, but she bounced back in style out aced the 165-metre sixth hole with a 7-iron.

She widened the gap on the chasing pack with further gains on 12 and 16 and sealed victory on one-under-par 107 and, despite giving a shot back to the field on the 17th hole, finished five shots clear of Berger.

It took a few more hours though, before Garcia and her team-mates Gabrielle Macdonald and amateur team-mates Abri Kriegler and Daren Hanekom could properly celebrate her third career victory.

“We had a genuinely great time out there and we were absolutely thrilled to be the first winners of the Canon Serengeti Par-3 Challenge.” – Ebotse golfer, Nicole Garcia.

Garcia’s birdie on 16 and a Macdonald birdie on 17 boosted the team aggregate to 17-under-par 199, matching the clubhouse target set earlier by Lewthwaite, fellow pro Tandi McCallum and their amateur partners Mike Honiball and Frank Neto.

“That meant a play-off on the 18th hole and The Shooters were excited, because we’d done well on 18 in both rounds; little did we know it would become a proper shoot-out Sunday,” Garcia said.

Both teams had chances to close out the win, including Kriegler who pushed a birdie putt past the hole on the first extra hole.

“We tied the 18th hole three times, so they took us to the first, and that’s where we got the job done,” said Garcia, who holed a long-range putt for birdie and was backed up by Kriegler, who got his birdie effort in the hole at last.

“Gabrielle and I had such an amazing time out there with Abri and Daren. Our amateurs could really play. Abri’s handicap index is 13, so he made a big contribution with his nett birdies. Gabrielle didn’t fire in the first round, but she made five birdies for us in the final round.

“What I will remember most about this tournament is the high fives, the first pumps and all the laughs. We had a genuinely great time out there and we were absolutely thrilled to be the first winners of the Canon Serengeti Par-3 Challenge.”

In addition to the first place prize money Garcia and Macdonald bagged, the Benoni and Berger also shared a R100 000 bonus that Serengeti Estates owner David Nagel kicked in for the two top finishing professionals.

Garcia spent the full 2019 season on the bench following hip surgery to re-attach the labrum and to reshape the femur bone to fit into the hip socket properly. She landed her third Sunshine Ladies Tour title in her fifth start this season, which bodes well for the “big three” starting next week in the Joburg Ladies Open.

“This tournament was perfectly timed in the middle of the season and it has been brilliant in terms of fine-tuning our games for the Joburg Ladies Open, the Jabra Ladies Classic and the Investec South African Women’s Open,” Garcia said.

“All three events are big-money tournaments and the last two come with some serious incentives. The winner of the Jabra Ladies Classic gets a start in the Jabra Ladies Open, which is the Ladies European Tour qualifier for the Evian Championship. And the winner at Westlake gets exemption on the Ladies European Tour until the end of 2021, and spots into the AEG British Women’s Open and the Evian Championship.

“The stakes are loaded. We all honed our short-games this week, and this golf course put up a huge challenge. It was very tough out there, and I think everyone who played this week, will agree with me that we are so much sharper thanks to this experience.”