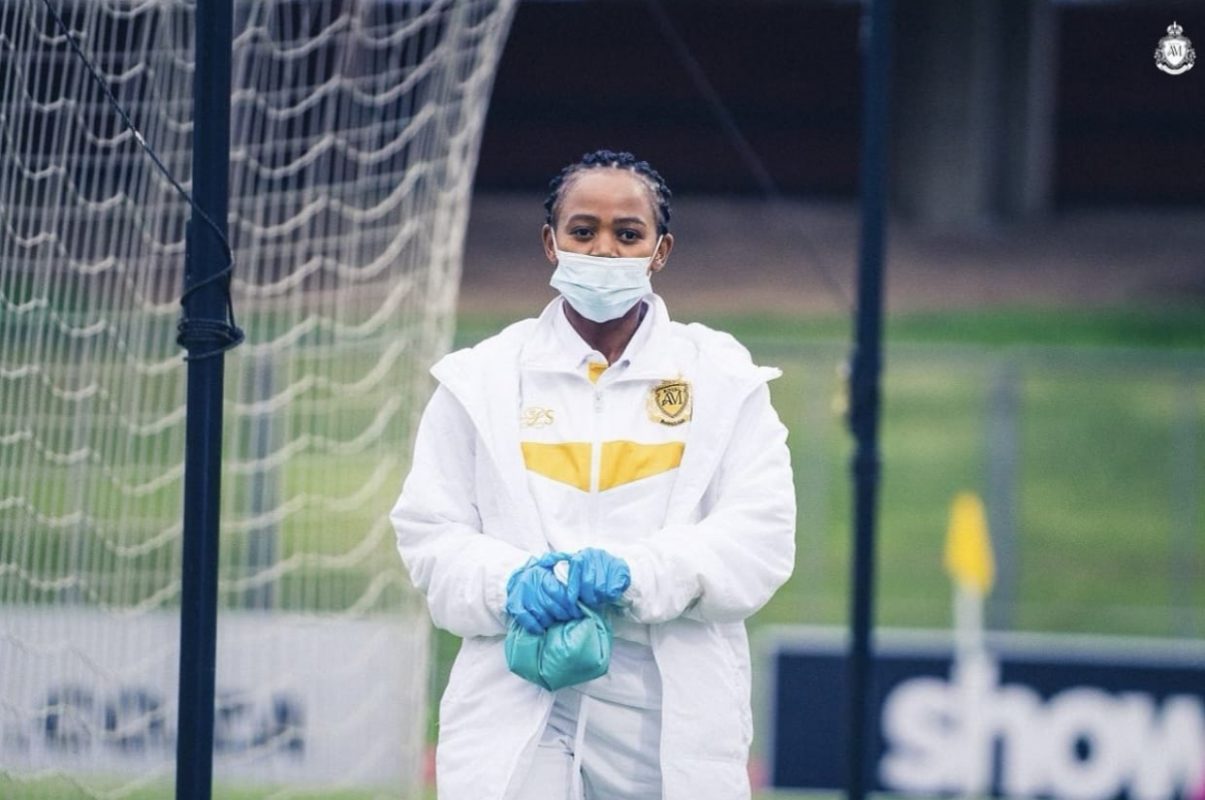 Royal AM FC team doctor, Singethiwe Chonco, is paving the way for women in the Premier Soccer League as the only woman doctor in the top flight.

Hailing from uMsinga in KwaZulu-Natal, Chonco believes in women being proactive in challenging themselves in a male-dominated sport code.

She says being in the field comes with challenges, however she has managed to deal with it all to become the woman she is today.

Her greatest ambition is to open her own sports clinic in KZN where she can assist players with their mental wellbeing and have a positive influence in improving their agility and performance.

Speaking with Tlamelo Kganakga, Dr Choco chats about her career journey to date and reveals her highlights.

Dr Singe, thank you for chatting with us. Please tell us about yourself and where you are from.

I am Dr Singethiwe Chonco, now commonly known as Dr Singe. I was born in a rural KZN town called uMsinga. Born into a family of 7, which included both my parents and I’m the 4th child out of 5 in the Chonco family.

My love for sport, specifically football, started at a very young age growing up. I was quite close to my father and brother who were die-hard fans of Kaizer Chiefs FC and my younger brother who also happens to be a professional football player.

Please tell us how you became the doctor of the Premier Soccer League’s Royal AM?

It was in 2020 that my love for football and my profession would interlink. I joined the PSL medical team in the Bio-bubble where I worked with different teams during the tough times of Covid-19 and eventually ended up being the only doctor to be a part of the relegation/promotion playoff games and the inaugural Nedbank cup final.

That is where I gained recognition amongst the PSL teams. With many teams pursuing my services, I eventually joined Royal AM FC and was appointed as their team doctor in the year 2020 and enjoyed my first season as a team doctor in the 2020/2021 season. I am currently in my second season.

Being a sports physician is quite different from medical practices because you have to treat players holistically compared to other hospital patients that I have to refer to other doctors. At the same time you have to care for their mental, physical health etc.

What challenges have you faced being a doctor for a sport team?

I feared the unknown challenges and the anxiety of entering a male-dominated sports industry but once I got inside, I overcame these challenges.

What do you enjoy most about your job and being the only female doctor in PSL?

I enjoy being treated like a queen (LOL) and making my mark as a young South African black female also to empower those women that are doubting themselves making it in the industry.

I’m proud of myself that I have made it this far and it has not sunk in that I was able to break boundaries. I hope that I have opened the doors for more women.

What’s your take on women taking positions such as yours, knowing you can be anything in sport?

As women I feel we need to be proactive with challenging ourselves by being involved in sport that is male-dominated because I believe we have the capabilities.

What has been some of your highlights in your career?

In November 2020 I worked at the Bafana Bafana vs Sao Tome AFCON qualifier – it was my first international match.

The second highlight was the inaugural Nedbank cup final between Mamelodi Sundowns FC vs Bloemfontein Celtic FC in 2020.

Carol Tshabalala reason beingher topics and analysis of the game are precise and informative. She literally takes you back to a player and brings you up to speed; and her talks are consistent.

I would like to do my masters in sports medicine and to one day open my own sports clinic in KZN, which is something that has not been done this far.

I also feel like most players that I have met have issues that are not being focused on, mainly being mental well-being and I hope to have a positive influence as this will improve the players’ motivation, agility and performance.

What do you think we as media can do to amplify women’s sport coverage?

Firstly, having such interviews is great exposure and an encouragement to women out there that with determination and success anything is possible. You need to be eager, passionate, and proactive in order to get exposure.

Photo 1 Caption: Royal AM FC team doctor, Singethiwe Chonco, is paving the way for women in the Premier Soccer League as the only woman doctor in the top flight. Photo: Supplied