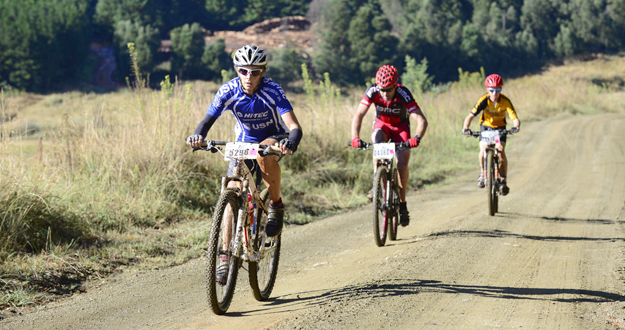 The toll of competing two days in a row was telling for Saturday’s Stihl Karkloof Enduro champion Natalie Bergstrom (Coffeeberry Momsen), when the leading KZN mountain biker could only finish in fourth place in the main event on Sunday, in a time of 4:02.50.

But after two days of non-stop rainfall which saw the festival’s Peri Night Race on Friday and Saturday’s Stihl Karkloof Enduro staged in exceptionally challenging conditions, the highly-competitive ladies field produced a race to remember as Dreyer, wife of Dusi Canoe Marathon legend and keen mountain bike competitor Martin Dreyer, claimed what was a comfortable victory in the end.

Despite sitting a couple of places back in the early stages of the 60km event, Dreyer made her move after the 10km mark, signaling the start of the climbs, and never looked back from there.

“I’ve been off the bike for a couple of years with the birth of children, but I’ve been back riding competitively since the Triple Challenge in November last year, and it’s been a really good six months since then,” said Dreyer.

“I’ve been training with Mart’s (Dreyer) RMB Change a Life Youngsters in the Valley of a Thousand Hills, and every race the focus for them hasn’t been on where they finish overall but rather about whether they beat me or not, so I’ve had some really good preparation coming into this.

“I certainly wasn’t expecting this though, especially with Mart and I focusing on the upcoming Freedom Challenge rather than the shorter, harder, faster stuff. Obviously there’s something still left in these legs though,” she chuckled.

Moffatt, having just returned earlier this week from a hugely successful European tour, has been in good form in recent weeks. Unfortunately she was just unable to match Dreyer’s performance on the day, crossing the line over nine minutes behind the leader.

“I’m still really happy with my performance today,” said Moffatt. “And it’s great to be back on home ground again too! The pace was really good up front, and then the mud made things a little more technical, but all round it was a great race.”

The day also played host to the aQuellé 20km Family Race and aQuellé 10km Kids Ride, which saw hundreds of cycling enthusiast young and old and of all walks of life take to the trails, bringing down the curtain on all yet another Sappi Karkloof Classic MTB Festival.

More info can also be found at www.karkloofmtb.co.za