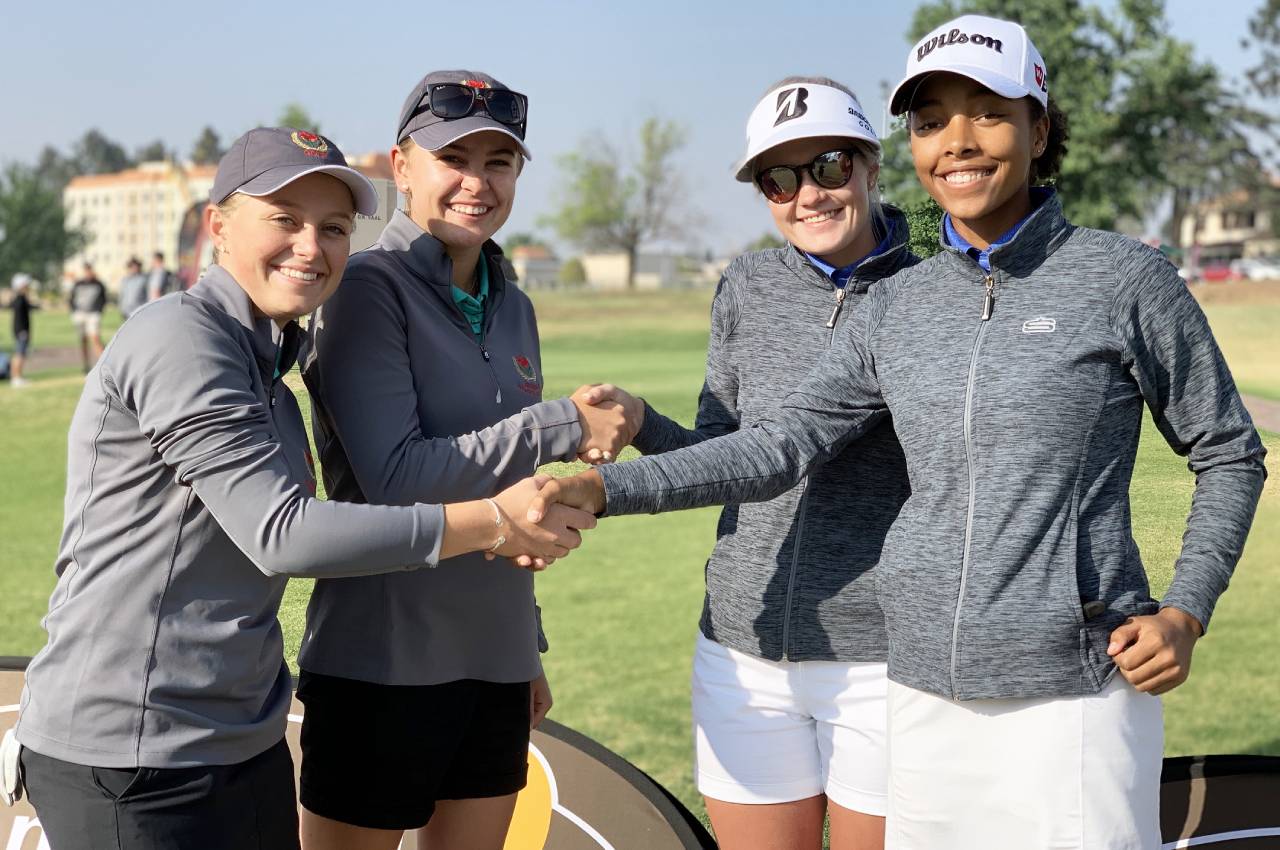 Ekurhuleni made a strong case for their title defence with a dominant start in Tuesday’s Seeding Round at the 59th SA Inter-Provincial Championship in Vereeniging.

The 2018 champions faced the stiff breeze at Riviera on Vaal Golf and Country Club head on in the morning foursomes to open up a 10-shot lead.

In the afternoon singles, Ekurhuleni stretched their advantage over 2017 champions Western Province A to a 23-shot victory, combining for a winning total of 356.

“We are encouraged to play to our own strengths.” – South African elite golfer, Caitlyn Macnab

“We didn’t go out there with a score-orientated goal,” said Macnab. “The message was to play solid golf, to keep it in play and to have some fun. We are encouraged to play to our own strengths and to determine our own scores, and that strategy paid off well for us at Devonvale last year.

“We set ourselves just one goal and that was to win the seeding round, and I am incredibly proud of the team for getting it done. Of course, once we start the match play stage, the slate is wiped clean, so we’ll enjoy this small victory tonight and come out fresh for the first battle on Wednesday.”

The Jean Tindall Memorial Trophy champions will go up against Western Province A, Gauteng and Boland in the top draw of the A-Division, while Gauteng North, KwaZulu-Natal, Mpumalanga and Southern Cape will battle for glory in the bottom draw.

The young quartet carded two rounds of 80 in the foursomes for a score of 160 and added 229 in the singles, with Brown carding 74, Bal 76 and Van Rooyen 79 to edge out the WGSA Invitation Team by 11 shots on a winning score of 389.

Nicole Strydom and Kaylan Boshoff from Ekurhuleni posted 80 and Kim Turgut and Tebogo Lefifi carded 82 in the foursomes to put the WGSA Invitational Team on attack and secured second with a total of 236 in the singles.

Border on 408 and North West on 417 completed the top draw, while Free State, Northern Cape, Eastern Province and Limpopo will battle each other in the bottom draw.

The first round of the match play stage – and the start of the promotion battle – will see Western Province B go head-to-head with North West and the WGSA Invitation Team battle Border.

Photo 2 Caption: Western Province B won the Seeding Round to lift the Nolan Karp Trophy in the 59th South African Women’s Inter-Provincial at Riviera on Vaal Golf and Country Club. Photo: GolfRSA