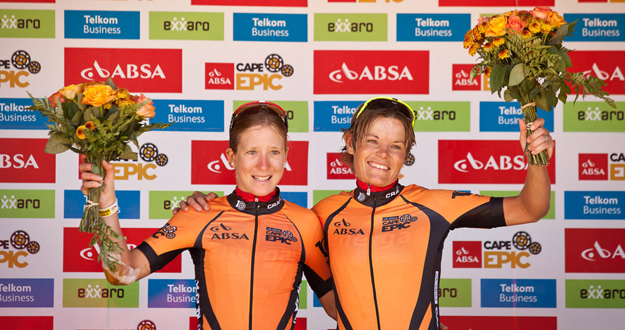 Stage 3 started with cool temperatures in the morning, and the early relief spurred Yolande Speedy and Catherine Williamson (Energas) on to win their second stage in a row in 4:58.36,2, and now lead the ladies category by 1 hour, 6 minutes and 45 seonds, with an overall time of 19:00.07,0.

Mountains surround the town of Tulbagh and stage three offered a tour of the basin, with a figure of eight which traversed the vineyards and farmlands, skirting these mountains. By now riders should have been used to starting with a climb.

This 400-meter climb over 15 kilometers, with a short warm up, was rather gentle on the legs. This was followed by three kilometers of sweeping single-track, finishing off with a section through popular forest. This was a pleasant day, with lots of ups and downs interspersed with flowing single-track sections.

The day was more gentle, the soil was softer, the vegetation more lush and the hills shorter. When riders heard the finish line and smelt the race village, their odometer only read 55 kilometers, so they needed to keep pedaling.

The second part of the figure of eight was shorter, but included the same amount of climbing as the first one. Dr Evil and the route-design team showed their true colours after water points three: a 1,5-kilometer climb on a steep farm road, followed by a short descent and three more short but sharp climbs on rough surface, before it was finally (almost) all downhill and back to the fields of Saronsberg Wine Estate.

Prologue and first stage co-leader Esther Süss has retired from the race due to illness. Her partner Jane Nuessli is now riding in the white Outcast jersey.

Says Speedy: “I’m sorry that the two strongest teams are out of the race. Esther (Süss) and Jane are also out. But it’s still the Absa Cape Epic and anything can happen.

“Jane (Nuessli) was riding with us at the beginning – it was such an honour. It’s the first time that I’m in the leading Orange jersey and we’ll still put everything into the race.”

Adds her teammate Williamson: “Anything can still happen – the race is still on. There is no bigger race than the Epic and if we win, I can retire happily at the end of the year if I want to.”

Says Erik Klienhans: “It was a good day. We didn’t have any problems. Theresa (Ralph) and Damian (Perrin) attacked from the start and managed to create a gap between us. We caught up with them later.

“We rode in a group for a while, and there was a lot of dust. Eventutally I said to Ariane that we must get away – we couldn’t see with all the dust. The last 20 or 30 km’s we lost them.

“Ariane is becoming stronger every day, and we’re very comfortable with our lead. We’re the only category with such a big lead on the others,” said Kleinhans. “But this is the Absa Cape Epic and anything can happen out there. We know from experience that you can never relax, so we’ll be riding hard for the rest of the race.”

Adds Ariane Kleinhans: “I’m feeling strong. It was quite hard for me in the beginning as I’m still quite tired from yesterday, but as we got to the climbing section I started to feel stronger. We had a good finish today.”

Stage four is characterised by three major climbs and extremely varied terrain. The first 15 kilometers are on flat gravel and also some tar road. The route then turns onto forestry roads, gaining some elevation while skirting the side of the mountain.

Riders will quickly reach water point one, but the next stretch is slow going. A five-kilometer steady climb on gravel road with an average of seven percent gradient waits at Kluitjieskraal.

On the other side, the trail roughens until it becomes an eight-kilometer bike-swallowing descent. The gradient is not steep but the track is washed out, rocky (and sandy) with many ruts and holes. After water point two, a flat gravel road leads to the foot of the 16-kilometer tar climb of Bain’s Kloof Pass.

Only the first bit of the descent is on tar before riders plunge into the Bain’s MTB Trails at Welvanpas: smooth flowing ups and downs, perfectly carved into the mountain side.

However, there is one more big climb, most of it on forestry roads, before four kilometers of handcrafted downhill single-track through fynbos vegetation. There is one more tiny bump and the last couple of kilometers are plain sailing into the race village in Wellington.