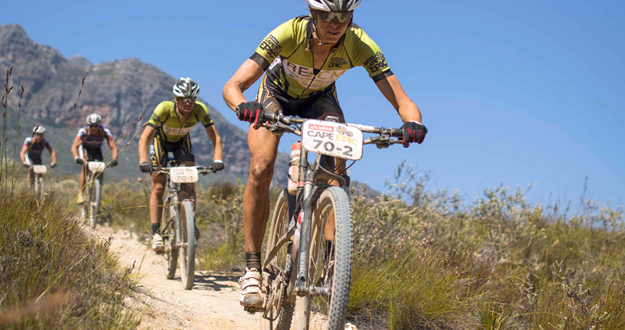 Stage 4 started with cool temperatures in the morning. It was a fast stage with lots of single-track, characterised by three major climbs and extremely varied terrain.

The first 15 kilometers were on flat gravel and also some tar road. The route then turned onto forestry roads, gaining some elevation while skirting the side of the mountain. Riders quickly reached water point one, but the next stretch was slow going.

A five-kilometer steady climb on gravel road with an average of seven percent gradient waited at Kluitjieskraal.

On the other side, the trail roughened until it became an eight-kilometer bike-swallowing descent. The gradient was not steep but the track was washed out, rocky (and sandy) with many ruts and holes. After water point two, a flat gravel road led to the foot of the 16-kilometer tar climb of Bain’s Kloof Pass.

On the other side, only the first bit of the descent was on tar before riders plunged into the Bain’s MTB Trails at Welvanpas: smooth flowing ups and downs, perfectly carved into the mountain side.

However, there was one more big climb, most of it on forestry roads, before four kilometers of handcrafted downhill single-track through fynbos vegetation. There was one more tiny bump and the last couple of kilometers were plain sailing into the race village in Wellington.

Says Yolande Speedy: “It was definitely a hard day with some proper climbing. We felt pretty strong and it was quite a fast stage with some stunning single-track. We’re very happy with our results.

“Our legs are sore and our bodies tired, but we’re still managing to get in a good effort.”

Adds her Energas teammate, British rider Catherine Williamson: “We had a good start and it was a really nice stage with some nice trails and forests. I had a bit of a crash but nothing major. We rode at our own pace and it was the best day so far.”

Says Cherise Stander: “I definitely didn’t think we’d finish in second place – it’s very unexpected. Today six years ago Burry and I started dating, so it would be the perfect day for us to finish on the podium. I’m just very happy at this stage.”

The fifth day is like a bonus day – short, sweet and, most importantly, great fun! Riders will already have had a taste of the Bain’s MTB Trails at Welvanpas on the previous day. It is a fantastic purpose-built network of single-track, perched between the Wellington vineyards and the slopes of Bain’s Kloof.

The relatively short distance of 75 kilometers offers more single-track than any previous Absa Cape Epic stage, featuring some amazing cross-country terrain and lots of twisting ups and downs – all in all an extra enjoyable day to re-energise body and mind. To avoid any congestion on the trails, the start groups will be staggered over 1,5 hours.