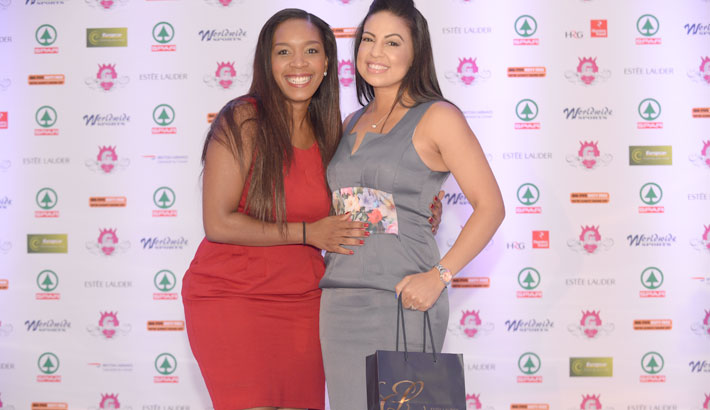 Everyone is Beautiful with Estée Lauder

In 1946, Estée Lauder and her husband Joseph Lauder started producing cosmetics in New York. They started off on a small scale, with just four products: Super-rich All Purpose Crème, Crème Pack, Cleansing Oil and Skin Lotion.

Everything was based on Estée Lauder’s simple premise: every woman can be beautiful.

From those small beginnings, they built one of the best-known cosmetic empires in the world.

Estée Lauder was a major presence at the SPAR gsport Awards on Monday 24 November.

Women arriving for the celebration were invited to a free makeover by a number of Estée Lauder beauticians, and every guest left the party with a big smile and an elegant blue carry-bag containing a bottle of Amber Mystique eau de parfum spray.

“gsport4girls resonates with us because we are all about celebrating the many roles women play in our society,” said Estée Lauder national communications manager, Lulu Ndevu.

“gsport4girls gives women in sport a platform to be celebrated as they deserve to be, and the Awards ceremony is an event where young women can get to see and be inspired by other women sport icons.”

Ndevu said it was very important to talk about breast cancer all year round.

“When Evelyn Lauder, daughter-in-law of our founder, began speaking out about breast cancer, very few people were talking about it openly,” said Ndevu.

“Evelyn Lauder, who became a very vocal breast cancer advocate, held a strong belief that knowledge is power, and felt a responsibility to speak up and share the stories of women and families whose lives were touched by the disease.

“Breast Cancer knows no race or boundaries and our campaign this year honoured the spirit of knowledge, sharing and taking action.”

Ndevu said the breast cancer awareness campaign and gsport4girls were just two examples of Estée Lauder’s commitment to improving the lives of women.

“I cannot ignore the timing of the awards, on the eve of 16 Days of Activism Against Women and Child Abuse,” she said.

“We also believe it is important to celebrate and honour the women of our country. There are many platforms to do this, but we didn’t have one for women in sport.

“So I thank gsport4girls for seeing the need, and acting on it. I challenge other corporates to become involved in such initiatives as they celebrate and recognize the mothers, sisters and daughters of our beautiful country.

“At Estée Lauder we call them our Modern Muses. They are strong and feminine at the same time. They are inspired and continue to inspire us too.”

Photo 2 caption: Estée Lauder all round as the 2014 SPAR gsport Awards guests, judges and Award Finalists got into the swing of the 2014 edition of the gsport Awards. Photo: Rebecca Hearfield / gsport