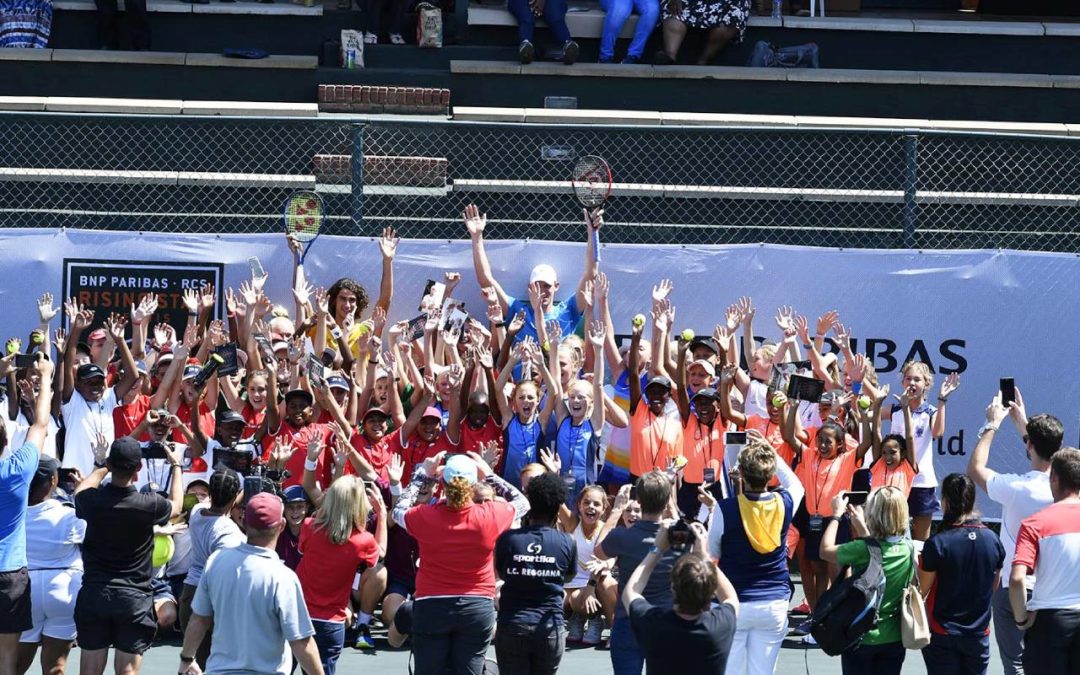 Tennis fever was in the air on Friday, 31 January 2020, as the BNP Paribas RCS Rising Star Tennis finals got underway at the Arthur Ashe Tennis Centre in Soweto, with the country’s top-ranked senior players watching from the side-lines.

As part of a three-day youth tennis festival, the inaugural BNP Paribas RCS Rising Star Tennis finals started with the first round of competition among the top 22 girls’ teams around the country, along with a development clinic hosted by SA men’s No 1 Kevin Anderson and SA No 2 Lloyd Harris.

The BNP Paribas RCS Rising Star Tennis finals, the culmination of a seven-month competition, were set to continue on Saturday and Sunday, while two-time Grand Slam finalist Anderson was gearing up to face top-flight prospect Harris in an exhibition match on Sunday afternoon.

“Hopefully we’ll meet some kids this weekend who in 10 or 15 years’ time will also be playing professional tennis,” Anderson said.

Harris was equally pleased to make a rare appearance on home soil after establishing his place on the ATP Tour in recent years.

“This whole initiative is very exciting. We really want people to be more enthusiastic about tennis and get more involved in our sport,” Harris said.

“Kevin and I are not going to be around forever, so we’d also like to see the younger generations getting opportunities, and I’m grateful to everyone for involving me in this. It’s a great opportunity for both of us to inspire a lot of players.”

For Tennis SA it was a big step forward as part of their long-term plan to develop and expand the sport.

“Hopefully this weekend will really inspire these kids to not only want to continue playing, but to inspire other people in their communities to take up tennis. That’s really what this is all about,” said Tennis South Africa CEO Richard Glover.

Other stakeholders were equally excited to see what would become of the BNP Paribas RCS Rising Star Tennis programme, which had already seen tremendous success in its first year.

“We first got involved in tennis by focusing on coaching, and we have now decided to take a step further with what we call tennis with purpose, and that’s where the Rising Star Tennis idea came from,” said Vikas Khandelwal, the CEO of BNP Paribas Group South Africa.

“I think it’s going to go from strength to strength at primary school level and I think this type of sports project really assists in the development of youth across the country.”

For Regan Adams, the CEO of RCS, the Rising Star Tennis programme is about showing the youth of South Africa what they can achieve by showcasing international stars like Anderson and elite prospects like Harris.

“As a tennis fan, this is a massively exciting week for me and we’ve been looking forward to this for several months now,” Adams said.